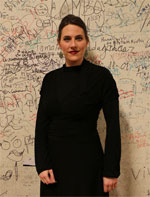 Lucile Richardot started singing at the age of 11 in a children’s choir in the East of France. She graduated in 2008 from the Maîtrise de Notre-Dame de Paris and in 2011 in Early Music from CRR de Paris. Lucile specialises in the field of early music as well as in contemporary repertoire, both on stage and in concerts, with Les Solistes XXI (conductor Rachid Safir), Correspondances (Sébastien Daucé), Ensemble Pygmalion (Raphaël Pichon), Le Poème Harmonique (Vincent Dumestre) and Les Arts Florissants (William Christie). She is also a highly sought-after oratorio soloist, and has worked with the Royal Liverpool Philharmonic Orchestra, the Rotterdams Philharmonisch Orkest, Akademie für Alte Musik Berlin and Les Violons du Roy in Québec and Montréal. In 2009, she premiered the role of the first Aunt in the Philippe Boesmans’ opera, Yvonne, Princesse de Bourgogne, at the Paris Opera and the Theater an der Wien.

In 2017 Lucile sang Lisea in Vivaldi’s Arsilda with Collegium 1704 (Vaclav Luks), and the roles of Penelope, Messaggera and Arnalta in Monteverdi’s three surviving operas, as part of the Monteverdi Choir & Orchestras 450th anniversary celebrations of the composer. Alongside these projects, Lucile also recorded her first solo album with Ensemble Correspondances, Perpetual Night, a collection of 17th-century English consort songs.

2018 saw her sing the role of Goffredo in Handel’s Rinaldo with Bertrand Cuiller’s Caravansérail, and her début at Aix-en-Provence Festival as the Sorceress and Spirit in Purcell’s Dido and Aeneas. She also performed Berlioz concerts with John Eliot Gardiner and the Orchestre Révolutionnaire et Romantique, which included performances at New York’s Carnegie Hall and Paris’s Philharmonie.