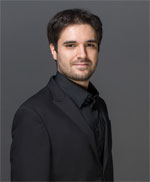 Carlo Vistoli began his vocal training as a countertenor with William Matteuzzi and Sonia Prina in 2007. He studied at the Frescobaldi Conservatory in Ferrara and at the University of Bologna and made his professional stage debut in 2012 as the Sorceress (Dido and Aeneas) in Cesena and Ravenna.

Highlights of his career since then have included Licida in Mysliveček’s L’Olimpiade in Bologna, the title role in Handel’s Tamerlano, Tolomeo (Giulio Cesare in Egitto) in Shanghai, a world tour as a member of William Christie’s academy Le Jardin des Voix, the world premiere of Adriano Guarnier’s video opera L’amor che move il sole e l’altre stelle, Febo in Caldara’s Dafne in Venice, Dido and Aeneas at the Teatro Regio di Torino, Ottone in Handel’s Agrippina in Brisbane (an interpretation for which he won a Helpmann Award), a European tour of Messiah under Christie, and L’umana Fragilità (Il ritorno d’Ulisse in patria) and Ottone (L’incoronazione di Poppea) as part of the Monteverdi Choir & Orchestra’s Monteverdi 450 project. Also in 2017 he toured Europe performing Monteverdi’s Selva morale with Christie and Les Arts Florissants, and sang Idraspe in Cavalli’s Erismena at the Festival d’Aix-en-Provence.

Highlights of 2018 included Ruggiero (Vivaldi’s Orlando furioso) under Diego Fasolis in Venice and a new production of L’incoronazione di Poppea in Salzburg under William Christie, again as Ottone.

In 2019 he sang Ulisse in Sacrati’s La finta pazza in Dijon and the title role in Gluck’s Orfeo ed Euridice at Teatro dell’Opera di Roma. He was also L’ospite in a new production by Teatro La Fenice in Venice of Sciarrino’s Luci mie traditrici. Future engagements include the title role in Vivaldi’s Farnace in Venice, Goffredo in Handel’s Rinaldo for Pinchgut Opera in Sydney and Ottone in Handel’s Agrippina in Teatro alla Scala di Milano.