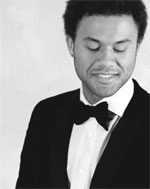 He has performed in Russia and abroad in such well-known venues as the Carnegie Hall, Royal Festival Hall, Tchaikovsky Concert Hall, Great Hall of Moscow Conservatory, The Kremlin Armoury, Cleveland museum of Natural History and many others.

In July 2017 Gerard made his London debut at the Royal Festival Hall with the Chineke! Orchestra and conductor Roderick Cox for this live recording of Rachmaninov’s Piano Concerto No 3. He also appeared on BBC Radio 3’s In Tune, where his performances were broadcasted live.

He has given a number of concerts with the State Symphony Orchestra of Moscow as well as playing with the Kaliningrad Chamber Orchestra under the prestigious baton of Aleksander Andreev. In 2014 he performed George Gershwin’s Rhapsody in Blue with Kursk Philharmonic Orchestra and Rachmaninov’s Rhapsody on a theme of Paganini with Yaroslavl State Philharmonic Orchestra. In 2017 Gerard appeared with the National Symphony Orchestra of Cuba and maestro Marlon Daniel with a programme featuring Burleske by Richard Strauss.

Gerard has been invited to perform at such international music festivals as Mozarteum (Salzburg, Austria), Montreux Jazz Festival (montreux, Switzerland), Larisa Gergieva (Vladikavkaz, Russia), The River of Talents ( Saint-Petersburg, Russia), Night in the museum (Tretyakovskaya Gallery, Moscow, Russia) and many others.

Gerard is a graduate of The Royal College of Music (Master of Performance, Artist Diploma, with Professor Norma Fisher), and the Moscow State Tchaikovsky Conservatory (postgraduate degree in performance, with Professor Sergey Dorensky). He holds a music Diploma (Distinction) from Moscow State Tchaikovsky Conservatory (2014), where he studied with Professor Sergey Dorensky and his assistants, professors Andrey Pisarev, Nikolay Lugansky, and Pavel Nersessian. In 2009 he graduated from Gnessin Music School (Undergraduate Diploma).

In October 2015, Gerard Aimontche made his orchestral debut, performing Rachmaninov’s Piano Concerto No 3 during the ‘Color of Music’ Festival in Charleston, South Carolina.

In July 2016 Gerard joined the Verbier Festival Academy, where he studied under the guidance of such brilliant musicians as Klaus Hellwig, Sergei Babayan and many more.