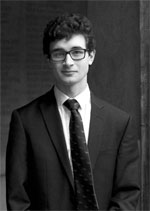 Dewi Rees is the Junior Organ Scholar of Jesus College Cambridge, where he is in his second year reading music.

Dewi was born in 1998 and became a chorister at Westminster Abbey at the age of 7, where he sang in daily services as well as at events such as Pope Benedict XVI’s visit to London in 2010 and the wedding of the Duke and Duchess of Cambridge in 2011. During his time at the Abbey he also played the trumpet and the piano, and was subsequently awarded a Music Scholarship to The King’s School, Canterbury. He started learning the organ in his second year at King’s and frequently accompanied the school choirs for their weekly services in Canterbury Cathedral. In his final year he played continuo for performances of Bach’s St John Passion in Canterbury Cathedral and the Église Saint-Jacques in Reims, as well as a performance of Britten’s St Nicolas with the Festival Chamber Orchestra, directed by David Newsholme. Dewi became an Associate of the Royal College of Organists in 2016, winning the Lord St Audries Prize, and has given organ recitals at venues including the Church of St Mary Magdalene, Newark, St George’s Chapel, Windsor Castle, and Trinity College, Cambridge. He has been taught by David Newsholme and Gordon Stewart and is currently studying with Ann Elise Smoot and David Briggs.