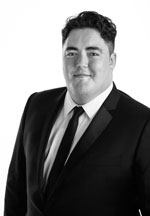 Andrew O’Connor was born in Perth, and graduated with a Bachelor of Music from the University of Western Australia. He relocated to Sydney in 2015 to join The Song Company.