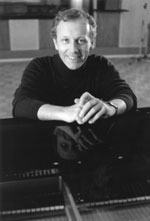 Charles Spencer was born in Yorkshire, England. He studied at the Royal Academy of Music in London with Max Pirani, during which time he was awarded numerous prizes, culminating in a scholarship from the Austrian Government to further his studies in Vienna with Walter Fleischmann, Noel Flores and Robert Schollum and attend master classes by Vlado Perlemuter and Geoffrey Parsons. He graduated from the Vienna Hochschule für Musik with unanimous distinction and was awarded the prize for artistic merit by the Austrian Government.

Mr Spencer is now one of the most sought-after accompanists. For over twelve years he worked with Christa Ludwig and in 1993 he accompanied her in her 'Farwell to Salzburg' concert, a recording of which was awarded the Diapason d'Or. Their subsequent recital, 'Tribute to Vienna', was issued on both CD and video and was awarded the prize of Classical Recording of the Year 1994 by Ongaku No Tomo (Friends of Music) magazine) in Japan.

Charles Spencer has regular engagements on the Continent, in Japan and the United States. He accompanies June Anderson, Gundula Janowitz, Sumi Jo, Marjana Lipovšek, Doris Soffel, Jessye Norman, Thomas Quasthoff, Peter Schreier, Deon van der Walt, Deborah Polaski, Teresa Berganza and Kathleen Kuhlmann. He has played for Thomas Hampson and John Shirley-Quirk on different occasions. He also appears with Thierry Félix, Christian Elsner and Ruth Ziesak who studied with him and all of whom went on to win international Lieder competitions.

He is Professor of Lied Interpretation for singers and pianists at the Hochschule für Musik in Frankfurt and gives regular masterclasses in Vienna and Salzburg and others in Germany, Japan and Iceland. Plans include masterclasses at the Rubin Academy in Tel Aviv.