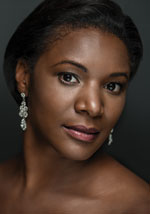 London-born Elizabeth Llewellyn studied at the Royal Northern College of Music and the National Opera Studio, supported by the Peter Moores Foundation. In 2009 she created the role of Ludovina in the premiere of Glyndebourne Festival Opera’s new opera The Yellow Sofa with the Britten Sinfonia. In the same year, Elizabeth won the inaugural Voice of Black Opera competition, and she was the opera nominee for the prestigious Breakthrough Award at the 2013 Times/Sky Arts South Bank Awards.

Elizabeth made her main-stage operatic debut as Mimì in Jonathan Miller’s production of La Bohème at the English National Opera, which led to her being named as ‘Best newcomer in opera in 2010’ by the Telegraph. As a notable lyrico spinto soprano, Elizabeth’s recent appearances include the title role in Puccini’s Madama Butterfly and Suor Angelica for the Royal Danish Opera, Copenhagen, the title role in Puccini’s La Rondine for Opera Holland Park, and the title role in Puccini’s Tosca and the role of Elsa in Wagner’s Lohengrin for Theater Magdeburg, Germany. Elizabeth was nominated for ‘Singer of the Year 2013’ in OpernWelt magazine for her portrayal of Amelia in Verdi’s Simon Boccanegra, a role she has also stepped in to sing for Sir Mark Elder, and created the title role in The Iris Murder at the St Magnus Festival with the Hebrides Ensemble.

As well as a successful Rosenblatt Recital at Wigmore Hall, Elizabeth’s recent concert appearances have included Beethoven’s Missa Solemnis with Sir Mark Elder, Mahler’s Symphony No 8 with Esa-Pekka Salonen, Tippett’s A child of our time with Ryan Wigglesworth, Vaughan Williams’s A Sea Symphony with Martyn Brabbins in concert and for Hyperion, Britten’s War Requiem, Verdi’s Requiem, and a live performance of Strauss’s Vier letzte Lieder on BBC Radio 3 with Donald Runnicles and the BBC Scottish Symphony Orchestra.

Elizabeth’s future engagements and projects include her US debut with Seattle Opera, a return to London to sing the title role in Puccini’s Manon Lescaut, and a recording of songs by Samuel Coleridge-Taylor.