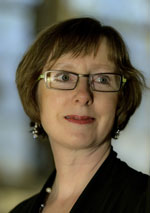 Caroline Trevor started singing in her father's church choir in the 1960s, and has hardly stopped since.

Having attended Chetham's Music School in Manchester and the Guildhall in London, she began singing professionally in 1980, giving concerts both in the UK and all over the world with various groups (The Tallis Scholars, The Sixteen, The Cardinall's Musick & The Taverner Consort amongst many others) , as well as performing & recording as a soloist.