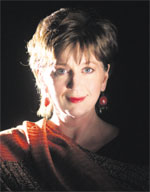 Isobel Buchanan was born in Glasgow and won a scholarship to The Royal Scottish Academy of Music and Drama in 1971. Whilst there, she attained her Diplomas for teaching and performing, won The Governors’ Recital Prize for Singing and was named Student of the Year 1974.

The following year, she auditioned for Richard Bonynge and Joan Sutherland who offered her a three year contract to sing with the Australian Opera Company in Sydney. She made her debut as Pamina in The Magic Flute to great acclaim and she went on to sing the role in many of the great opera houses of the world. Other roles with the AO included Fiordiligi, The Countess, Zerlina, Micaela, Norina, Gilda, Amelia, Helena (A Midsummer Night’s Dream) and Blanche (Dialogues of the Carmelites). She sang two seasons for the Lyric Opera of Chicago as Zerlina in Don Giovanni and as Adina in L’elisir d’amore with Carlo Bergonzi and later with Luciano Pavarotti, who had requested her for the role, having recorded with her in London in La Sonnambula with Joan Sutherland.

Isobel has appeared with all the major British orchestras and has travelled the world singing with conductors such as Carlos Kleiber, Georg Solti, Andrew Davis, Colin Davis, Celibidache, John Pritchard, Neville Mariner, Richard Bonynge, and Yehudi Menuhin. She has won many prizes and accolades and her recording of the Mahler 2nd Symphony with Solti was awarded the Grande Prix du Disque. She was also named Star of Scotland by public vote in 1976.

In 1981, the BBC commissioned a documentary of her work to date, directed by Michael Radford, who went on the become a well known film director. She has also had her own TV series and has appeared as a guest on other TV and radio shows, such as Face the Music and The Michael Parkinson Show.

Isobel lives in Bath, where she teaches privately. She gives masterclasses and workshops throughout the UK and acts as external examiner for the Music Colleges in London.