Colin Currie Group is a virtuosic ensemble that specialises in the music of Steve Reich. Their performances of Reich’s music have been hailed by the composer as 'the best I’ve ever heard' (Tehillim, Tokyo 2017).

Led by Colin Currie, the hand-picked group was formed in 2006 for a performance of Drumming at the BBC Proms to celebrate the 70th birthday of Steve Reich. In the subsequent decade, the group have performed Drumming around the world. They have expanded their repertoire to include many of Reich’s most popular works, including Music for 18 musicians, Sextet, Tehillim and Music for pieces of wood, and are privileged to have frequently had the composer present when rehearsing and performing these works.

In 2014 the Group premiered Steve Reich’s Quartet (for two pianos and two vibraphones), dedicated by Reich to Colin Currie. Since the premiere at London’s Southbank Centre, the group have given multiple performances of this work, including across the UK, Europe, Asia and America. In 2018, the group’s debut release of Steve Reich’s Drumming was released on Colin’s label, Colin Currie Records. 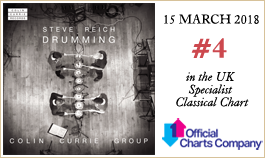