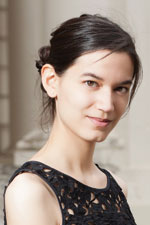 German soprano Natasha Schnur studied at the University of Music Karlsruhe under Donald Litaker and at Yale University under James Taylor, specializing in early music. She was awarded the Hugh Porter Scholarship from Yale’s Institute of Sacred Music and the Margot Fassler Prize in the Performance of Sacred Music. At Yale she performed with conductors Masaaki Suzuki, David Hill and Nicholas McGegan. Concerts included J S Bach’s Trauerode and Magnificat, as well as Brahms’s Ein deutsches Requiem. In 2017 she made her debut at Lincoln Center’s Alice Tully Hall performing in the premiere of Reena Esmail’s This Love between Us.

In collaboration with pianist Markus Hadulla, Schnur performs in the musical-literary concert series wort+ton. These concerts combine two art forms about which Schnur is passionate: literature and art song. She is a regular member of the Vocalensemble Rastatt and the RIAS Kammerchor, and is one of six laureates of the eighth edition of Le Jardin des Voix. She performed in the programme An English Garden under the direction of William Christie and Paul Agnew at the Festival Dans les Jardins de William Christie, and then on tour at the Théâtre Graslin in Nantes, the Théâtre de Caen, the Auditorio Nacional de Música in Madrid, the Auditorio de Zaragoza, the Paris Philharmonie, and the Tchaikovsky Concert Hall in Moscow.