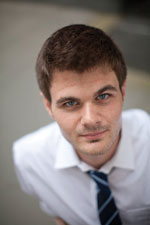 This season, Matt returns to the concert stage for performances of Bach’s Trauerode and Hasse’s Miserere with Masaaki Suzuki at the Lincoln Center, Brahms’s Ein deutsches Requiem and Handel’s Occasional Oratorio with David Hill, and Herzogenberg’s Die Geburt Christi with Marguerite L Brooks. Later in the season, he will tour India performing Bach’s Magnificat with Juilliard415.

Originally from Baltimore, Maryland, Matt is a graduate of the Peabody Conservatory, where he studied under John Shirley-Quirk and William Sharp. He is currently completing his master’s degree in early vocal performance at the Yale School of Music under the direction of James Taylor.