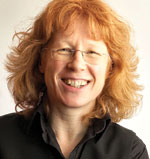 Sian Edwards studied at the RNCM and with Ilya Musin at the Leningrad Conservatoire. In September 2013 she took up the role of Head of Conducting at the Royal Academy of Music. She has worked with many of the world’s leading orchestras and opera companies across America, the UK and Europe, and has a particularly close relationship with Ensemble Modern in Germany.

She made her operatic debut in 1986 and her Royal Opera House debut in 1988. From 1993 to 1995 she was Music Director of English National Opera. She conducted the premiere of Mark-Anthony Turnage’s Greek at the Munich Biennale in 1988, and the premiere of Hans Gefors’ Clara for the Opéra-Comique in Paris.

Sian’s recordings include Peter and the Wolf, Britten’s Young Person’s Guide and Tchaikovsky’s fifth symphony, all with the London Philharmonic Orchestra, and Judith Weir’s Blond Eckbert with English National Opera.