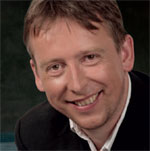 see also Gary Cooper (organ)
Gary Cooper is one of the foremost ambassadors of the harpsichord and fortepiano—in particular, as an interpreter of Bach and Beethoven’s music—and of period performance in general. Along with countless performances worldwide he has made many recordings for TV, radio and CD, including an award-winning CD of Bach’s Well-Tempered Clavier. His diverse recital repertoire ranges from the music of the Elizabethan Virginalists to the harpsichord music of Bach and Scarlatti, from Mozart’s piano sonatas to the music of Dussek, Clementi, Beethoven and Mendelssohn.

Adding to an extensive discography, solo recording projects with Channel Classics include Bach’s complete solo Keyboard Concertos and the Goldberg Variations, Mozart’s and Haydn’s Piano Variations, and Beethoven’s Diabelli Variations and the late bagatelles, all on historic keyboards of the period. He recently recorded C P E Bach Concertos and Haydn Symphonies with the Canadian ensemble, Arion, and Avison’s keyboard quartets, with The Avison Ensemble..

The duo partnership of Gary Cooper and Rachel Podger has taken them worldwide. Their recordings with Channel Classics of Mozart’s Complete Sonatas for Keyboard & Violin have received countless awards and accolades, including multiple Diapason d’Or awards and Gramophone Editor’s Choices, and hailed as ‘benchmark’ recordings. The duo’s concert & recording focus now extends to Beethoven, following performances at London’s Wigmore Hall.

Gary is also an established conductor, having worked with many ensembles, most recently the Akademie für Alte Musik in Berlin, the Holland Baroque Society, the Irish Baroque Orchestra, and Ensemble Cordia in Italy; he also performs regularly in North America where he directs the leading Canadian period instrument ensemble, Arion, in Montreal. Gary is an artistic director of the exciting Belgian period instrument ensemble, B’Rock, directing orchestral and opera productions and recordings. Last year, Gary appeared at many major festivals such as the Flanders Festival, the Bruges, Utrecht, Potsdam and Innsbruck Early Music Festivals, and throughout the UK.

Gary currently teaches harpsichord & fortepiano at the Royal Academy of Music, York University and the Royal Welsh College of Music & Drama, is Visiting Professor of Fortepiano at the Royal College of Music, and regularly holds master classes at other teaching institutions such as McGill University in Montreal, as well as involving himself in summer courses, such as at the Accademia in Brunico, Italy. Gary is also studying to be a Reiki healer.