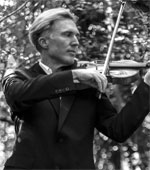 Jonathan began playing the violin at the age of 5, his main professors were Howard Davis, Krzysztof Smietana and Masayuki Kino. By the age of 21 he had performed with all the major London orchestras. At 28 he became a signed artist to EMI as part of the classical fusion group ‘The Planets’, which went on to sell 500,000 albums worldwide.

Subsequently Jonathan moved to commercial session work for film and TV and in the last 25 years has appeared on over 2000 recordings and had nearly 2 billion streams. In 2019 he again took up the mantle of the leader of the longest running and most famous show in the world, Les Miserables at the Sondheim Theatre, London.

Jonathan is a 5th Dan Blackbelt and senior instructor in the Shotokan Karate Association.