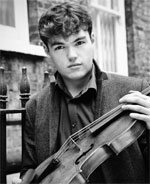 Timothy Ridout, a BBC New Generation Artist and Borletti-Buitoni Trust fellow, is one of the most sought-after violists of his generation. He was born in London and graduated with the Queen’s Commendation for Excellence from the Royal Academy of Music. In 2019 he completed his master’s at the Kronberg Academy in Germany, studying there with Nobuko Imai, and is a member of The Bowers Program of the Chamber Music Society of Lincoln Center.

Much in demand as a chamber musician, Timothy has taken part in important festivals across Europe, and in recent seasons he has made debuts with the Chamber Orchestra of Europe, Symphoniker Hamburg, Orchestre national de Lille, Camerata Salzburg, BBC Philharmonic and Philharmonia Orchestra; undertaken a residency with the Philharmonie Baden-Baden; performed Walton’s viola concerto with the Tonhalle-Orchester Zürich; and worked with conductors such Christoph Eschenbach, David Zinman and Sakari Oramo. His latest album, A poet’s love, which he recorded with the pianist Frank Dupree, features selections from Prokofiev’s Romeo and Juliet and the artists’ own transcription of Schumann’s Dichterliebe.

Timothy Ridout plays a viola made in c1565-75 by Peregrino Micheli di Zanetto, on loan from a generous patron of Beare’s International Violin Society.