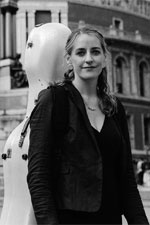 Katherine Jenkinson is recognised as one of the UK’s leading cellists specialising in solo and chamber music. The Independent newspaper recently praised her ’technical security backed up by rare musical sensitivity’. She has performed as recitalist and concerto soloist throughout Europe, Africa, USA and Asia and has even performed the Dvořák cello concerto outside in the sweltering heat of The Seychelles.

She was musically educated at the Royal Academy of Music under Colin Carr and David Strange and has since been privileged to become an Associate of this institution (ARAM). Chamber music has always been a key part of Katherine’s musical life. She is a current member of The Aquinas Piano Trio and was a member of The Allegri String Quartet from 2008 to 2011.

In contemporary music, Katherine has worked closely with composers, Arvo Pärt, Anthony Payne, Richard Allain, Thomas Hyde and Oliver Davis. In 2017, Katherine recording Morpheus, a new cello concerto with The Royal Philharmonic Orchestra which was written for her by Oliver Davis.