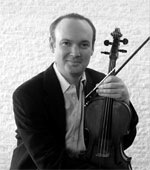 Born in Los Angeles he studied with Alan de Veritch, Paul Doktor, and William Primrose. Mr Neubauer is the artistic director of the Mostly Music series in New Jersey and is on the faculty of The Juilliard School and Mannes College.