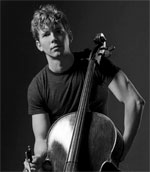 Joshua Roman has earned an international reputation for his wide-ranging repertoire, a commitment to communicating the essence of music in visionary ways, artistic leadership and versatility. As well as being a celebrated performer, he is recognized as an accomplished composer and curator, and was named a TED Senior Fellow in 2015.

This season Roman will make his Detroit Symphony Orchestra debut, and perform his own Cello Concerto, Awakening, with the Princeton Symphony in collaboration with conductor Teddy Abrams. In Europe, Roman will perform one of his favorite 20th Century Cello Concertos, that of Polish composer Witold Lutosławski, with the Szczecin Philharmonic of Poland. Other season highlights include performances of Tornado with the JACK Quartet with San Francisco Performances, Town Hall Seattle, Interlochen and numerous presenters throughout the country.

Notable events from last season included the premiere of Tornado, a new work composed by Joshua Roman and commissioned by the Music Academy of the West and Town Hall Seattle. The lauded premiere took place with the JACK Quartet at the Music Academy of the West in June of 2017. He also gave his debut at the Spoleto Festival in Charleston, comprised of not only performances with high caliber musicians from the St Lawrence String Quartet and other corners of the chamber music world, but a performance of his solo piece Riding Light. Orchestral highlights of the season included performances of the Mason Bates Cello Concerto with the Portland, Berkeley, Spokane, and Memphis Symphonies. The concerto is dedicated to the cellist, who gave its 'world-class world premiere' (Seattle Times) with the Seattle Symphony in 2014, and has since performed it with orchestras around the US In November of 2016, Roman’s musical response to the tension around the US Presidential election—Let’s Take A Breath—brought almost one million live viewers to TED’s Facebook page to hear his performance the complete Six Suites for Solo Cello by JS Bach.

Before embarking on a solo career, Roman spent two seasons as principal cellist of the Seattle Symphony, a position he won in 2006 at the age of 22. Since that time he has appeared as a soloist with the San Francisco Symphony, Seattle Symphony, Los Angeles Philharmonic, BBC Scottish Symphony, Moscow State Symphony and Mariinsky Orchestra, among many others. An active chamber musician, Roman has collaborated with Cho-Liang Lin, Assad Brothers, Christian Zacharias, Yo-Yo Ma, the JACK Quartet, the Enso String Quartet and Talea Ensemble. His YouTube series (youtube.com/joshuaromancello), Everyday Bach, features Roman performing Bach’s cello suites from beautiful settings around the world. He was the only guest artist invited to play an unaccompanied solo during the YouTube Symphony Orchestra’s 2009 debut concert at Carnegie Hall, and has given a solo performance on the TED2015 main stage. Roman is grateful for the loan of an 1899 cello by Giulio Degani of Venice.