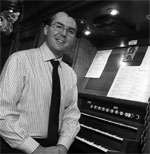 Until September 2017, Jonathan was Chapel Organist at the Old Royal Naval College, Greenwich; where he was assistant to Dr Ralph Allwood MBE. During his time at the ORNC, Jonathan was responsible for playing the organ for the weekly liturgies and conducting the choir of students from Trinity Laban Conservatoire of Music and Dance. Prior to this, Jonathan spent four years as Sub-Organist and Assistant Director of Music at St Peter’s Cathedral, Bradford.

A graduate of the University of Sheffield, Jonathan holds organ and choral directing diplomas from Trinity College London and the Royal College of Organists.