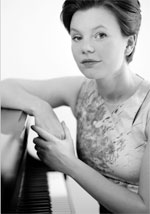 Acclaimed as a pianist of 'amazing power and panache' (The Telegraph), Clare Hammond is recognised for the virtuosity and authority of her performances and has developed a 'reputation for brilliantly imaginative concert programmes' (BBC Music Magazine, ‘Rising Star’). She won the Royal Philharmonic Society’s ‘Young Artist Award’ in recognition of outstanding achievements in 2015. Highlights in 2016 included a performance at the Royal Festival Hall with the Philharmonia, and a concerto tour of Poland, with a newly discovered work by Josef Mysliveček, a mentor of Mozart. Clare also curated three concerts for the BBC at the Belfast International Arts Festival, which were broadcast as part of the BBC Radio 3 Lunchtime Concerts series.

Clare has released three discs with BIS which have been widely praised. The Observer described her as a 'star interpreter of contemporary music' while Gramophone noted her 'unfaltering bravura and conviction'. In 2015 Clare performed at the Barbican Hall and made her film debut as the younger version of Maggie Smith’s character, ‘Miss Shepherd’, in the Alan Bennett film adaptation, The Lady in the Van, directed by Nick Hytner. Contemporary music forms an important part of Clare’s work and she has given 35 world premieres to date, including those of major works by composers Robert Saxton, Michael Berkeley, John McCabe and Arlene Sierra.