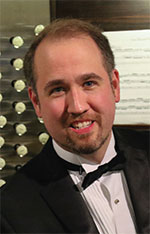 A native Washingtonian, Todd Fickley began his organ studies at Washington National Cathedral under Bruce Neswick. At 23, Mr Fickley was made a Fellow of the American Guild of Organists and also holds the AGO Choirmaster Diploma. He studied piano under Victor Shklyar of the Saint Petersburg Conservatory, holds piano performance diplomas from the American College of Musicians, and earned a Master of Arts degree in Organ Performance, with High Distinction, from the University of Wales. He is equally comfortable on the podium, at the pipe organ, harpsichord, and piano.

A prize-winning organist and specialist in the music of JS Bach, Mr Fickley has appeared frequently on NPR and PRI. He has performed and conducted across the United States, Europe, and Israel. In 2014, he launched THE BACH PROJECT, a new concert cycle to perform and record all of Bach’s organ works. Two volumes have been released: ‘some of the most enthralling Bach organ playing you are likely to hear anywhere by anyone’ (Fanfare). ‘Indeed, this is some of the most absorbing Bach playing you can ever come across. An inspired undertaking that will surely rank with the last twenty-five years’ best recordings in the genre’ (Music and Visions).

Mr Fickley is the acting artistic director of the Washington Bach Consort, having performed with them for over 15 years. He is also associate music director and chorus master of the Cathedral Choral Society, the assistant director and keyboard artist for the Choralis Foundation, and organist of The Falls Church Anglican. His musical career spans over 25 years in the nation’s capital, performing with the NSO, the Washington Ballet, and the National Philharmonic, and frequently appearing as conductor, recitalist, concerto soloist, accompanist, and speaker in Washington arts venues. Mr Fickley recently performed Bob Chilcott’s works in their European premieres in Leipzig, Dresden, and Berlin.

A strong proponent of music education, he spent years teaching and preparing choirs and instrumentalists of all ages using the Royal School of Church Music system for performances of wide-ranging repertoire. He is a long-time cast member of the Washington Bach Consort’s acclaimed outreach to Washington’s inner-city schools, ‘Bach to School’, and 2017’s new ‘Wunderkind’ initiative.