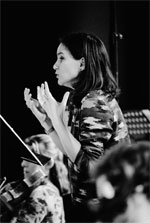 Praised for her 'brilliant technique' and her 'velvety timbre' (Opera Magazine), Swiss soprano Chiara Skerath has made acclaimed débuts in the title role of Monteverdi’s L’incoronazione di Poppea at Opéra de Nantes, as Mélisande (Pelléas et Mélisande) at Opéra de Bordeaux, Ännchen (Der Freischütz) in Paris and on tour with the Insula Orchestra, and as Antigone (Enescu’s Oedipe) at the Salzburg Festival. She has also appeared in numerous roles at Opéra National de Paris.

She has already established an outstanding reputation as a Mozart singer, with her roles including Zerlina (Don Giovanni) at Opéra de Versailles and at the Drottningholm Festival, Despina (Così fan tutte) at Oper Frankfurt and Stadtheater Bern, Servilia (La clemenza di Tito) at Opéra du Rhin, Cinna (Lucio Silla) at Theater an der Wien, Opéra de Versailles and the Paris Philharmonie, Pamina (Die Zauberflöte) at Opéra de Saint-Etienne, and Barbarina and Susanna (Le nozze di Figaro) at Opéra Royal de Wallonie and Operklosterneuburg. She first worked with Ian Page and The Mozartists on their recording of Mozart’s Il sogno di Scipione, and has since appeared with them as Ninetta (La finta semplice) and in concert at London’s Wigmore Hall and Southbank Centre.