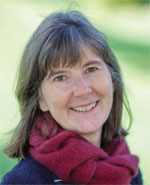 Anna Markland defied the sceptics whilst both at school and college, and has had varied and wonderful careers not only as a pianist but also as a singer for the last thirty plus years.

She was educated at Chetham’s School of Music in Manchester and in 1982 won the BBC Young Musician of the Year competition. Many concerto and recital performances followed, and in 1984 she went to Worcester College, Oxford to read music. She spent two years as a postgraduate at the Royal Academy of Music studying with Philip Fowke, a teacher who continues to inspire her to this day, and with whom she has performed extensively, focusing on the two piano repertoire.

During her time at Oxford she became a founder member of the now internationally recognised vocal ensemble I Fagiolini, thus beginning her singing career as Anna Crookes. 2015 highlights included a Carnegie Hall debut in New York and a new ‘first’ when she both sang and played the piano on Amuse Bouche, a recording of French twentieth-century music for Decca, released in April 2016 and followed by a Wigmore Hall performance. Recent projects include accompanying singers from Oxford University for their finals recitals, and collaborations with The Pixels Ensemble, a group specialising in both classical and twentieth century repertoire, to perform Luciano Berio’s iconic Sequenza Three for solo voice.

No two days are ever the same for Anna, and this has resulted in a joy of music in all its forms; whether teaching, playing, adjudicating, accompanying, recording or singing!

When not immersed in music, Anna’s other passion is vegetable growing on her allotment, and she feels that the patience and nurturing required to produce successful produce perfectly mirrors the dedication needed to be a musician.