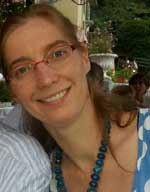 Rianka Bouwmeester was born in the Netherlands where she had her first piano lessons with Jaap Neuteboom and Rudy de Heus before moving to London in 1994 for post-graduate study at Trinity College of Music with John Bingham and the Guildhall School of Music and Drama with James Gibb, winning many prizes and awards for her solo and accompaniment work.

She has performed and broadcast in Germany, Hungary, Romania, The Netherlands, Belgium, Iceland and the U.K. as well as appearing several times live on BBC Radio 3 with Sir James Galway. She is currently employed by the Keyboard and Vocal Departments at Trinity Laban, working as an accompanist and vocal coach.

Rianka is married to the cellist, David Kenedy. They have given many performances together.