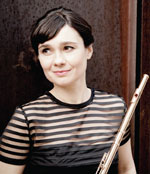 Magali Mosnier has signed an exclusive contract with Sony Classical (Sony-BMG Berlin). Her first album Fantaisie with the Münchner Rundfunkorchester was released in Spring 2006. On this occasion, she was awarded the Klassiche Echo for Most Promising Artist. A second one, dedicated to J.S. Bach with the Stuttgarter Kammerorchester was released in Autumn 2009, followed by Mozart’s double concerto with Xavier De Maistre and the Mozarteum Orchester in 2013 and her own Mozart album with the Münchener Kammerorchester in Spring 2015. As well as this she has recorded the Vincent d’Indy triple concerto for Piano, Flute and Cello with Brigitte Engerer, Marc Coppey and the Orchestre de Bretagne under Lionel Bringuier for the label Timpani and contributed to several chamber music recordings dedicated to Ravel (with Nora Gubisch and Alain Altinoglu), Jacques Lenot, Laurent Lefrançois. Magali Mosnier has been Section Principal at the Orchestre Philharmonique de Radio France (conducted by Myung-Whun Chung) since 2003.