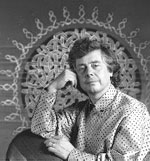 see also Anthony Rooley (lute)
see also Anthony Rooley (vihuela)
see also Anthony Rooley (director)
Having risen from humble beginnings as a skiffle player in Yorkshire, Anthony Rooley now enjoys an international reputation in several related fields. Firstly, as a lutenist discovering forgotten masterpieces from the Renaissance. Also, as director of the Consort of Musicke, a renowned ensemble dedicated to the research and performance of the vast repertoire of music for voices and instruments from the sixteenth and seventeenth centuries. Finally, as artistic director of Musica Oscura, a new record company for the bold, the progressive and the discerning, launched officially in Auturm 1993 following the release of the first five CDs. He has also ventured into the field of TV and video, which resulted in Banquet of the Senses, featuring the Consort of Musicke performing erotic madrigals by Claudio Monteverdi in the setting for which they were written - the Palazzo Te in Mantua.

Live performance was the subject of his first full-length book (Performance: Revealing the Orpheus within), published by Element Books in 1990. This has achieved worldwide readership among both general audiences and students of performance and has just been translated into Japanese.

Anthony's activities include the project Perfect and Endless Circles was created in collaboration with the novelist Russell Hoban to mark the 350th anniversary of the death of Wiliam Lawes. Also, as a highlight to Purcell's tercentenary year, Anthony has been involved in a bold and progressive re-working of Henry Purcell's and Thomas D'Urfey's musical play Don Quixote. Don Taylor has rewritten Cervantes' original story in such a manner as to appeal to contemporary audiences and Anthony has collected together the original songs as well as scouring source material for incidental music. The result is a musical with all the excitement of today's London West End shows, but which weaves together inextricably the 1990s and the 1690s. There are rollicking tunes, low-brow lyrics and moments of sublime art all rolled into one - truly something for everyone.

Of course, Anthony still manages to fit in teaching and performances in many corners o the globe as a soloist and in smaller ensembles.