see also Classical Opera
The Mozartists, under the dynamic leadership of conductor and artistic director Ian Page, are leading exponents of the music of Mozart and his contemporaries. Originally called Classical Opera, the company was founded in 1997, and has received widespread international acclaim for its stylish and virtuosic period-instrument orchestra, its imaginative and innovative programming, and its ability to nurture and develop world-class young singers.

The Mozartists perform regularly at the UK’s leading venues, including Wigmore Hall, the Barbican, Southbank Centre and Birmingham Town Hall, and have also toured to Germany, Austria, Italy, France, Greece and the Czech Republic. Renowned for their fresh and insightful interpretations of well-known masterpieces as well as for their ability to bring rare and neglected works to light, they have mounted staged productions of many of Mozart’s operas, and have also given numerous UK premières, including Gluck’s La clemenza di Tito, Telemann’s Orpheus, Jommelli’s Il Vologeso, Haydn’s Applausus and Hasse’s Piramo e Tisbe.

In 2015 the company launched MOZART 250, a ground-breaking 27-year project exploring the chronological trajectory of Mozart’s life, works and influences. Described by The Observer as 'among the most audacious classical music scheduling ever', this flagship project presents 250th anniversary performances of most of Mozart’s important works, placing them in context alongside other significant works by Mozart’s contemporaries.

Page and his ensemble have released over a dozen acclaimed recordings. Their first two CDs—‘The A-Z of Mozart Opera’ and ‘Blessed Spirit – a Gluck retrospective’—were both selected for Gramophone’s annual Critics’ Choice, and the first seven releases in their ongoing cycle of the complete Mozart operas have all attracted outstanding reviews. Other recent recordings have included ‘Mozart in London’ and the first two volumes in a new ‘Sturm und Drang’ series. 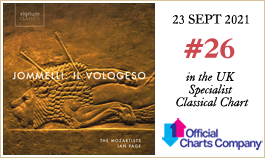 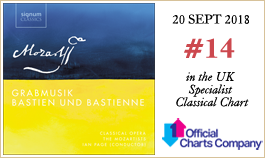