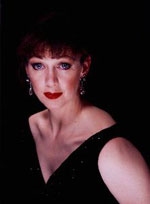 Rosa Mannion was born in Liverpool, and studied at the Royal Scottish Academy of Music and Drama. Rosa Mannion made her debut at Covent Garden as Pamina in a new production of Die Zauberflöte in November 1993. She has sung with all the main British companies in Constanze (Entführung aus dem Serail), Cordelia (Lear) by Albert Reimann, Sophie (Werther), Sophie (Rosenkavalier), Oscar (A Masked Ball), Gretel (Hansel and Gretel), Atalanta (Xerxes), the Countess (Marriage of Figaro) and Minka (Le Roi Malgré Lui).