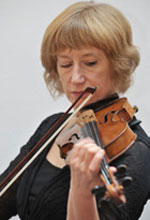 Ruth Crouch studied with Emmanuel Hurwitz at the Royal Academy of Music, after which she won scholarships to study for two years with Professor Max Rostal in Switzerland. On her return to London she joined the contemporary music group Lontano with which she toured extensively, appearing at the Proms twice, making numerous BBC recordings and several CDs.

Ruth has played with the Nash Ensemble, Schubert Ensemble and the London Sinfonietta, which she has led on several occasions, and with which she has played as a soloist. She has also made solo appearances with the London Bach Orchestra and Tiford Bach Orchestra as well as the Scottish Chamber Orchestra. She has appeared as guest leader with John Eliot Gardiner’s Orchestre Révolutionnaire et Romantique and with Flemish Opera in Antwerp.

Since moving to Edinburgh as Assistant Leader of the SCO, Ruth has continued to play as a Guest Leader with orchestras such as the BBC Scottish Symphony Orchestra and Northern Sinfonia. She is an active chamber musician, both within the orchestra and with other ensembles including the Chamber Group of Scotland and the Hebrides Ensemble. She teaches at the Royal Scottish Academy of Music and Drama.