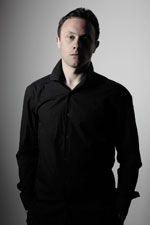 Since graduating from Philadelphia’s Curtis Institute in 1998, Matthew Trusler has developed a reputation as one of Britain’s leading violinists, performing with many of the world’s great orchestras, and receiving huge critical acclaim for his diverse recordings.

Performing on a bow once owned by Heifetz, given to him by Herbert Axelrod (who himself received it from Heifetz), Trusler has received particular acclaim for his performances of works from the twentieth century, including concertos by Walton, Berg, Britten and Lindberg. His recording of concertos by Korngold and Rózsa with the Düsseldorf Symphony received five stars in BBC Music Magazine under the headline ‘Hotter than Heifetz?’

Trusler has been invited to perform as a recitalist and concerto soloist throughout Europe, Australia, the USA, Japan and South Africa. In the UK he has performed with major orchestras including the BBC Symphony, BBC Scottish and BBC Welsh orchestras, the Philharmonia, London Philharmonic, Royal Philharmonic, City of Birmingham, Hallé and Academy of St Martin-in-the-Fields. Further afield, he has appeared with the Minnesota Orchestra, NDR Hanover, Helsinki Philharmonic, Deutsche Symphony Berlin, Malaysian Philharmonic, Düsseldorf Tonhalle, Flanders Symfonieorkest and Johannesburg Philharmonic. Some of his personal highlights include his debut at the BBC Proms where he performed the Mathias Violin Concerto with the BBC National Orchestra of Wales, tours with the Australian orchestras (including appearances in Perth, Queensland and Tasmania), a tour of Germany with the Academy of St Martin-in-the-Fields and Sir Neville Marriner, and a tour of Mexico with Martyn Brabbins and the Philharmonia.

Alongside his concerto work Matthew Trusler is an accomplished recitalist and an avid chamber musician who has performed recitals in leading venues around the world. Trusler has performed frequently with Wayne Marshall, and their album Blues presented a collection of short pieces by composers directly influenced by jazz.