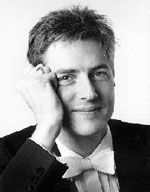 Mr Goodwin is now recognised as one of Britain's leading early oboe specialists and is principal oboist of The English Concert and The London Classical Players. He has a recital repertoire ranging from the seventeenth century to the nineteenth, working with harpsichord, fortepiano and string ensembles. His collection of period instruments spans nearly two centuries and includes originals by Millhouse (1750), Collier (1780), Triebert (1810), Kuss (1835) and Moenig (1870).

As a soloist Mr Goodwin has performed and broadcast throughout Europe, North America and Japan, and has played concertos in many of the world's finest concert halls, including Alice Tully Hall, New York; the Philharmonie, Berlin; the Musikverein, Vienna, and the Concertgebouw, Amsterdam. He is Professor of Baroque and Classical Oboe at The Royal College of Music in London.

Mr Goodwin has recently embarked upon a new career—that of conductor. He is Associate Conductor of The Academy of Ancient Music, Director of the RCM Baroque Orchestra and of the Dartington Festival Baroque orchestra. He also directed a moving performance of Bach's St Matthew Passion for a televised broadcast of the work produced by Jonathan Miller.