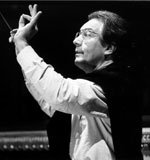 After Karl Anton Rickenbacher's American debut in 1989, Musical America wrote: '… Rickenbacher has Klemperer's musical depth and probing insight, Boulez's eye for detail, and the zest and energy that have characterised Karajan at his best.'

Karl Anton Rickenbacher's professional life started in opera, initially as Repetiteur and Assistant Conductor at the Zurich Opera House. In 1969 he was appointed Principal Conductor at the Freiburg City Opera where he advanced to the position of Deputy Music Director. During these early years Otto Klemperer had a decisive influence on his development and described him as 'one of the most talented conductors of the younger generation'.

After a nine year period conducting a broad repertoire, Rickenbacher accepted the post of Music Director to the Westfalian Symphony Orchestra, a position he held from 1976 to 1985. His international career was launched with his nomination as Principal Conductor to the BBC Scottish Symphony Orchestra in 1978.

In both opera and concert he conducts not only the masterpieces of standard repertoire but also contemporary music, earning him the admiration and respect of many composers. Olivier Messiaen spoke of Rickenbacher as 'a great conductor of our time, who discerns precisely the relevant aesthetics of each work'.

Rickenbacher's extensive discography shows his passionately inquiring mind. In his recordings many works appear for the first time on CD and reveal a broader view of the creative output of even the greatest composers. The repertoire includes Beethoven, Brahms, Bruckner, Grieg, Hartmann, Hindemith, Humperdinck, Liszt, Mahler, Messiaen, Milhaud, Nicolai, Spohr, Richard Strauss and Wagner, with such orchestras as the London Philharmonic, the Berlin Radio Symphony, the Bavarian Radio Symphony, the Bamberg Symphony and the Budapest Symphony Orchestras.

Born in Basel, Switzerland, Rickenbacher studied at the Berlin Conservatory, taking courses with Herbert von Karajan and Pierre Boulez. He has established an international reputation as a conductor perpetuating the tradition of his illustrious mentors.