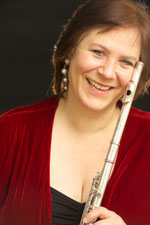 'A first-rate virtuoso' (The Financial Times)

Philippa Davies has established an international reputation as one of the finest flautists currently performing. A ‘first-rate virtuoso’ with ‘exceptional eloquence’ she has been noted for an ‘almost electrical response to technique’. As a recitalist, she plays and broadcasts throughout the world at international festivals, whilst performing concertos and giving master classes from China to the USA. She has performed concertos with the New Stockholm Chamber Orchestra, the BBC Symphony, the BBC Philharmonic and the BBC National Orchestra of Wales, the English Chamber Orchestra, City of London Sinfonia and the London Mozart Players.

Philippa's current schedule includes many performances with The Nash Ensemble and London Winds, Davies Cole Duo (with Maggie Cole) and her quartet Arpège. Earlier in her career she was the flute player with Sir Peter Maxwell Davies's ensemble Fires of London and also Capricorn and the Albion Ensemble. Originally Principal Flute of the National Youth Orchestra, Philippa went on to train at the Royal College of Music with Douglas Whittaker where she won many awards including the Tagore Gold Medal Prize, Eve Kitsch flute prize and the Worshipful Company of Musicians Award. She then studied with William Bennett and won the National Federation of Music Societies Award, the Mozart Memorial Prize and was a Park Lane Group Young Artist.

Since her much-admired performance of Mozart's D major concerto with the BBC Symphony Orchestra at the BBC Proms in 1988 she has become a popular BBC Proms artist. As the solo flute in Havoc by Giles Swayne, she gave a thrilling performance at the World premiere (BBC Proms 2000). Since then she has appeared at the BBC Proms with The Nash Ensemble performing the Copland Duo, Pierrot lunaire and Façade as well as with London Winds.

Mozart, Bach and Vivaldi feature prominently in her repertoire, memorable live performances and recordings include those of Mozart's D major, G major and Flute & Harp concertos, Bach B minor suite, and Vivaldi concertos. Philippa is as well known for her interpretations of contemporary pieces as the classics. with composers including Sir Peter Maxwell Davies, Jonathan Harvey, Giles Swayne and Robert Saxton having written for her.

Philippa is a Professor at the Guildhall School of Music and runs her own highly regarded Flute Course at Benslow each summer.