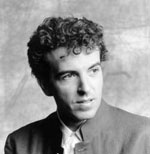 see also François Le Roux (baritone)
Awarded the title of 'Chevalier' of the French National Order of Arts and Lettres in 1996, and Musical Personality of the Year by the French Critics Association in 1997, François Le Roux is a native of Rennes, the capital of Brittany. He studied science and English at the University, after which he began his vocal studies, at the age of nineteen with François Loup and later with Vera Rosza and Elisabeth Grümmer at the Opéra Studio in Paris. He was a member of the Lyon Opera Company from 1980 to 1985 and since then has been a guest with all the major European opera houses and festivals.

Monsieur Le Roux has appeared at Glyndebourne as Ramiro in Ravel's L'Heure Espagnole, in Hamburg and Oslo as Marcello in La Bohême, in Frankfurt as Orestes in Gluck's Iphigénie en Tauride, at the Royal Opera House, Covent Garden, as Lescaut in Massenet's Manon, as Papageno in Mozart's Magic Flute conducted by Colin Davis, and as Figaro in Rossini's Barbiere di Siviglia.

In 1988 he made his debut as Valentin in Gounod's Faust at the Paris Opéra. The role of Don Giovanni played on the same stage enjoyed a real triumph and brought him the French critics' Prix de la Révélation de l'Année. As Don Giovanni, Le Roux has also appeared in Zürich under Harnoncourt, and also in England.

In 1985 he sang Pelléas in Debussy's Pelléas et Mélisande for the first time and at once was described by the critics as 'the greatest Pelléas since Jacques Jansen'. He has now sung the role over a hundred times on the most renowned operatic stages of the world.

In addition to many operatic recordings, Le Roux has made several records of French song for French labels which have been enthusiastically received, gaining him a reputation as Gérard Souzay's successor. His record Fables de La Fontaine received the French Record Academy Award.

Monsieur Le Roux gives numerous recitals with such renowned accompanists as Irwin Gage, Roger Vignoles, Jeff Cohen and now Graham Johnson, and he also gives masterclasses dedicated to the interpretation of French song. He is the winner of international competitions in Barcelona ('Maria Canals') and Rio de Janeiro.