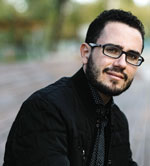 Luca Buratto, 2015 Honens Prize Laureate, is a pianist of ‘fiery imagination and finesse’ (Musical America). In addition to his success at Canada’s Honens Piano Competition, the Italian pianist was awarded third prize at the International Robert Schumann Competition (Zwickau) and the special ‘Acerbi’ prize, awarded to a distinguished finalist at Milan’s Shura Cherkassky Competition, both in 2012. He first caught the public’s attention at the Conservatory of Milan’s Sala Verdi where, for a Holocaust Remembrance Day event in 2003, he performed music by Renzo Massarani, his great-grandfather. Through Honens’ Artist Development programme, Buratto performs at London’s Wigmore Hall, Zankel Hall at Carnegie Hall, Berlin’s Konzerthaus, Marlboro Music Festival, Ottawa International Chamber Music Festival and Busoni Festival. Orchestral engagements following his Honens win include performances with the Toronto Symphony Orchestra, London Philharmonic and his concerto debut at La Scala with Orchestra Giuseppe Verdi.

Luca Buratto earned his piano diploma from Milan Conservatory and his master’s from Bolzano Conservatory. He was a Theo Lieven Scholar at the Conservatory of Lugano, from which he received his Master of Advanced Studies. Luca Buratto studies at The Colburn School in Los Angeles with Fabio Bidini. His teachers have included Davide Cabassi, William Grant Naboré and Edda Ponti.