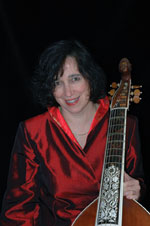 Anne-Marie Lasla studied violin with Dominique Hoppenot, and later viola da gamba with Wieland Kuijken. She was a founder member of the Orlando Gibbons Consort of Viols in 1987, and has performed with distinguished Baroque music ensembles such as Collegium Vocale Gent, Les Musiciens du Louvre, Il Seminario Musicale, the Ricercar Consort, Les Talens Lyriques and Le Poème Harmonique. She tours throughout the world in concerts and opera productions as the gamba continuo player in Les Arts Florissants.

She also performs chamber music with such distinguished artists as Christophe Rousset, Wieland Kuijken, William Christie, Philippe Pierlot, Paul Agnew, Carolyn Sampson and Sébastien Marq. She is the gamba player of the chamber music ensemble Amarillis. She has over 100 albums to her credit. Her recording of Sainte-Colombe’s viol music with Sylvie Moquet was highly acclaimed by the critics.