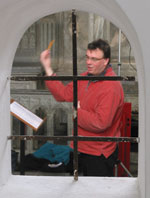 see also Andrew Carwood (conductor)
Andrew Carwood is one of the most versatile musicians of his generation, having had an illustrious career as a singer before focusing attention on conducting and choral direction. In 2007 he was appointed Director of Music at St Paul’s Cathedral in London—the first non-organist to hold the post since the twelfth century. He trained as a choral scholar at St John’s College, Cambridge, a lay clerk at Christ Church, Oxford and Westminster Cathedral, London before holding the post of Director of Music at the Brompton Oratory in London for five years.

As a conductor his reputation was established with The Cardinall’s Musick and together they continue to perform throughout the United Kingdom and Europe. Renowned for their emotional directness and vocal colour, the group has won five Gramophone Awards as well as many other European plaudits. Andrew has become a widely acknowledged expert on music of the sixteenth and seventeenth centuries and is also known for the scholarly and entertaining way in which he introduces and narrates concerts, breaking down barriers between audience and performers and allowing the music to speak in an even more eloquent way.

At St Paul’s he directs the world famous choir of men and boys for the daily liturgies of the Cathedral, special services of national importance, recordings, tours and concert appearances. The foundation is lavish with thirty choristers and twelve professional singers and they perform a wide range of music, encompassing everything from Renaissance music to contemporary and including repertoire with orchestra. Andrew has recently appeared with the City of London Sinfonia, the London Mozart Players and the BBC Concert Orchestra.