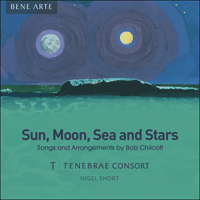 'Renowned for their recordings of Tallis and Bruckner, the Tenebrae Consort, drawn from Nigel Short’s equally celebrated Tenebrae Choir, here bring the same perfect technique and miraculous sense of ensemble to 22 instantly attractive songs and arrangements by Bob Chilcott … kick your shoes off, sit back and enjoy' (The Observer)

I grew up singing very much in the world of English Church music. However, I’ve always had a love of jazz and popular songs and this love has filtered through my work ever since. As a student in 1973 I remember hearing the new King’s Singers album Out of the blue for the first time, and being particularly excited by the suave and beautifully crafted arrangements by Richard Rodney Bennett of Gershwin songs. I also remember hearing The King’s Singers in 1976 and loving the concert, particularly an arrangement of After the Goldrush, a Neil Young song arranged by Peter Knight.

Armed with the idea that performing and writing arrangements of songs like these could become a reality for me I went to London as a singer, and at the same time worked as an arranger and orchestrator for BBC Radio 2. Here I was either writing arrangements for orchestra alone or writing orchestral accompaniments for singers. I listened to a lot of music at this time, and was particularly inspired by a duet concert and a number of recordings I heard of the vibraphone player Gary Burton and the pianist Chick Corea. I loved the clarity and sonority of their music-making and this motivated me to find aspects of these qualities in my own work. Writing arrangements at the BBC helped me to form a concept in my mind of how I wanted to serve a song, how to frame it and shape it, and how to find ways of helping project text and meaning. I was lucky to be able to write quite a number of versions of songs for the vocal group The Light Blues and then later for The King’s Singers, and this I did with a lot of energy and enthusiasm. It also helped having such expert singers to help bring a piece to life. I was so grateful for this opportunity as consequently it gave me confidence in my work as a composer and also helped in my search to shape songs. I would love to think that as a result there is a little of that clarity and sonority I heard from Gary Burton and Chick Corea appearing occasionally in my work today.

We are very lucky in Britain to have such a vibrant choral life and many fine choirs and groups that sing a very wide range of repertoire. A good number of musicians now working in choral music like me have been at some time members of groups such as The King’s Singers and The Swingle Singers, to name but two. Joanna Forbes L’Estrange, who sings on this recording was herself a member of The Swingle Singers, and Nigel Short, now a distinguished conductor and Gabriel Crouch, singer, conductor and now also Director of Choral Activities at Princeton University in New Jersey were colleagues of mine in The King’s Singers. The one thing I know we all thrived on, and continue to do so, was a curiosity, an appreciation and an openness to many different styles of music. I also think that we learned that the nature of our work demanded not only the pursuit of the highest technical standards, but also the ability and desire to communicate and bring to life the essence of the music, whatever the style. Nigel Short has continued to do this with a passion and his uncompromising commitment to his choral vision through his work with Tenebrae Choir and the Tenebrae Consort has raised the bar for us all.

I am thrilled that they have made this recording of these songs and arrangements, some from a long time ago, some more recent, sometimes frivolous, sometimes reflective, but all performed with the beauty of sound and the breadth of skill and personality that is synonymous with the work of Nigel and his singers.