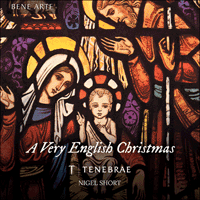 Award-winning choir Tenebrae returns under the expert direction of Nigel Short to record a sumptuous album of Christmas carols old and new.

My love of Christmas music stems from my own experience as a chorister, singing all the traditional congregational carols, their descants, many new arrangements of well-known tunes and of course an ever increasing number of new compositions. At a lunch with one of Tenebrae Patrons, Richard Baker (himself a former chorister and choral scholar at King’s College, Cambridge), a discussion was taking place regarding repertoire for a future Tenebrae recording. Rather rashly I said that having already done two Christmas recordings, I wasn’t entirely sold on the notion of doing another one, but Richard began asking me if I knew this or that carol: the list seemed endless. I knew the names of many of the composers and arrangers he was mentioning, but some only as choir masters or organists, not as composers. Eventually we decided there was more than enough wonderful repertoire that would provide a musical breath of fresh air come Christmas time and also give us a chance to herald the extraordinary talents of some of the most dedicated and less well-known individuals from the world of English choral music in the 20th century, thus ‘A Very English Christmas’ came to be.

Love is always at the heart of the Christmas message and it became clear to all of us involved with this recording that all of the composers represented had/have a deep felt love for both their subject matter and the beautiful, transporting sound of a fine choir. After I had come to London to study in 1983, I started to meet and work for a variety of people, some of whose names when uttered in the company of anyone who has been involved with our glorious heritage of Cathedral and Church music were met with an almost reverential affection. One such was Simon Preston, for whom I have an enduring admiration and was fortunate enough to sing for in the choir of Westminster Abbey when I was just 20 years old. His music making was incredibly exhilarating and perhaps a little terrifying too, maybe that was part of the excitement! In more recent years we have sadly lost John Gardner, Philip Ledger and Richard Hickox. I had the pleasure of singing for Richard as a soloist on several occasions and was always struck by his convivial manner, whilst managing to make everyone realise they had to give him everything. Christopher Robinson was Director of Music at the other great shining beacon of choral music in Cambridge, St John’s College, and is another whose name will for ever be associated with English choral music at its very best. All the other names on the disc have played their part too in inspiring choirs the length and breadth of the country by either providing beautiful music for choirs to sing or by devoting themselves in some way to choirs singing beautifully.

Singing this collection of Christmas music was such a fun and rewarding experience and together with my wonderful team of singers who so positively embraced this project we would like to thank Richard Baker who so kindly supported this recording.