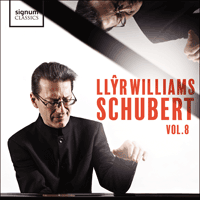 Franz Liszt’s evangelising zeal for piano transcription generated a vast catalogue of works encompassing the Renaissance composer Jacob Arcadelt through to Liszt’s compatriot Géza Zichy. Arrangements of operatic arias and overtures and entire symphonies were all grist to his mill, and of 150 songs Liszt transcribed, more than a third were by Schubert. Whilst most of these occupied him for some ten years from 1836, his admiration for the Viennese composer was lifelong. In addition to nearly sixty song transcriptions, Liszt made several orchestral arrangements, including the ‘Wanderer’ Fantasy, he directed the first performance of Alfonso und Estrella in 1854 and edited two volumes of Schubert’s piano sonatas in 1880. His lieder were transformed into vividly reimagined concert pieces which brilliantly demonstrate Liszt’s heightened response to poetic imagery and resourceful use of keyboard sonorities.

Das Wandern, S565/1, and Der Müller und der Bach, S565/2, belong to Liszt’s pared down transcription of Die schöne Müllerin. Devised in 1846, this assemblage of six songs in no way invalidates the emotional trajectory of Wilhelm Müller’s love-sick miller whose romantic wanderings end permanently beneath the waters of the brook that has been his constant companion. Liszt faithfully renders the playful optimism of Das Wandern (The Wanderer), transcribing three of its five verses, adding arpeggio elaboration to the second and expanding pianistic textures in the third.

The joys of the open road vanish in the numbed despair of Der Müller und der Bach (The Miller and the Brook) where a heartbroken apprentice shares his grief with his watery confidante. Torment and consolation are perfectly caught here and following an ingeniously fashioned third verse (marked quasi Flauto) Liszt extends the transcription to augment a plea for the brook to continue ‘singing’.

Schubert’s bravura Erlkönig, the fourth of Liszt's Zwölf Lieder, S558, from 1838, would surely have appealed to Liszt’s theatrical instincts and it became a much-requested recital piece for the virtuoso across Europe. The four characters of Goethe’s text (narrator, terrified father, dying child and seductive erlking) are skilfully differentiated by adroit changes in register.

From the same collection comes Frühlingsglaube, S558/7, originally written in 1821 to a text by the Tübingen poet and historian Ludwig Uhland. Translated as ‘Faith in Spring’, the song’s poise reflects the promise of a benign change in nature that will banish all sadness. Its gentle melody transfers from the upper voice to the tenor register before a brief cadenza leads to a closing ritornello.

Setting a poem by Christian Friedrich Schubart, Die Forelle (The Trout), S563/6, is one of Schubert’s most familiar songs and is performed here in an arrangement by Llŷr Williams who amalgamates Liszt’s two 1846 transcriptions. Its vivid portrayal of the waterside scene and the luckless trout is given considerable elaboration.

Schubert’s collection of songs known as Schwanengesang (Swan Song) was collected and published after his death by Tobias Haslinger, who wished to give the impression that Schubert had intended these songs as a cycle in the mode of Die schöne Müllerin or Winterreise. Franz Liszt wrote piano transcriptions of these songs, rearranging the order, and published them in 1838-39. The four songs in this group are settings of poems by Ludwig Rellstab.

In Ständchen (Serenade), S560/7, the poet beckons his lover to him in the moonlight, aided by the song of the nightingales. The birds understand the heart’s longing, and add their voices to that of the poet as he waits for his beloved.

In Liebesbotschaft (Love’s Message), S560/10, the poet begs the brook to take a message of greeting to his beloved, and to refresh the flowers in her garden. The brook must comfort her as she dreams of her lover, and murmur a lullaby to her as she goes to sleep. The accompanying figure in this transcription shows the rippling of the brook.

Emotions and nature are superbly entwined in the theatrical Aufenthalt (Resting Place), S560/3. In this fifth song from Schwanengesang, chromatic flourishes darken further the troubled mood and the rustling treetops that smother the poet’s cries in verse two are here amplified by its sonorous three-octave melody.

In der Ferne (From Afar), S560/6, calls down woe on the fugitive who flees his country, forgetting his homeland and his family. But it is clear that the fugitive is fleeing from love, and in the end he sends greetings from afar to his beloved.

In 1841 Liszt published a set of four Geistliche Lieder (Spiritual Songs) of which Litanei, auf das Fest aller Seelen (Litany for All Souls Day), S562/1, sets a devotional text by Johann Georg Jacobi. Whilst reducing Schubert’s three verses to two, this transcription beautifully preserves the rapt mood of the 1816 original and perfectly encapsulates, especially in its octave doubling, Sigismund Thalberg’s notion of ‘the art of singing applied to the piano’.

Ständchen (Serenade), S558/9, is a setting of Shakespeare’s ‘Hark, hark, the lark at heaven’s gate sings’ from Cymbeline. Schubert’s song has the Deutsch catalogue number D889.

From Winterreise Liszt set 12 songs and rearranged their order, no doubt recognising many of the poet ‘s emotions in words reflecting his own circumstances: an itinerant concert virtuoso travelling around Europe is not so far removed from the lonely wanderer making his way through Schubert’s comfortless song cycle.

To poems by Wilhelm Müller (1794-1827) published in two volumes in 1824, Schubert produced Winterreise in 1827, when he had come close to breaking point. His friends, during one performance when Schubert sang ‘in a voice wrought with emotion’, were bewildered by the work’s gloom. Franz von Schober, at whose house the songs were sung, declared his liking only for ‘Der Lindenbaum’, the most obviously ‘tuneful’ number in the collection. Conscious he had achieved something quite extraordinary even by his standards, Schubert reportedly replied: ‘I like these songs better than any others, and you will come to like them as well’.

Winterreise concerns a solitary wanderer’s hopeless love, whose sole company on his winter journey (excepting an organ grinder in the final song) is the howling of dogs, a scavenging crow and his own increasingly illusory observations as his mind unravels. Like the composer, the central isolated figure of Winterreise is no longer an innocent youth but one whose life has been blighted by experience.

In Die Post, S561/4, the wanderer rejoices at the sounds of an approaching coach (galloping rhythms and fanfare figures) in the delusional belief that it carries a letter from his sweetheart. Under the bare branches of Der Lindenbaum (The Linden Tree), S561/7, the wanderer dreams of a time when he had carved his sweetheart’s name. The song’s graceful melody glows with lost happiness to which Liszt applies a wealth of delicate ornamentation. Indeed, Liszt places all pianistic means possible at the service of expression, and such was the clarity of execution that one performance in 1839 drew from the Wiener Theaterzeitung the assertion, ‘Performed the way we are hearing it played by Liszt, the songs truly do not need the text to be comprehended’.

Auf dem Wasser zu singen, S558/12, is Liszt’s transcription of Schubert’s song setting of a poem by Friedrich Leopold, Graf zu Stolberg-Stolberg. The soul glides like a boat along the shimmering waves, while the sunset reddens the leaves of the trees. Time vanishes on dewy, radiant wings. Schubert’s song setting is Op 72, D774, and was written in 1823.

Ave Maria (Ellens Gesang Ill), S558/12, was Schubert’s setting of Sir Walter Scott’s ‘Hymn to the Virgin’ from his long poem The Lady of the Lake, in a translation by Storck which only loosely follows Scott’s English text. The first verse (in Scott’s original) reads:

Ave Maria! maiden mild!
Listen to a maiden’s prayer!
Thou canst hear though from the wild;
Thou canst save amid despair.
Safe may we sleep beneath thy care,
Though banish’d, outcast and reviled—
Maiden! hear a maiden’s prayer;
Mother, hear a suppliant child!
Ave Maria!

Altogether, Schubert set seven songs from The Lady of the Lake, in a song cycle Op 52, of which ‘Ave Maria’ is No 6, D839. Schubert’s song was later adapted as a setting for the Latin hymn ‘Ave Maria’, recorded by, among others, the last Vatican castrato, Alessandro Moreschi, leaving the popular but false impression that Schubert himself had written it as a setting of the Latin text.