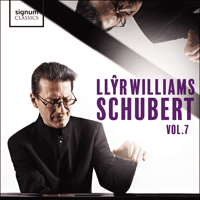 Schubert's Sonata in C major dates from 1825, but for reasons unclear was left unfinished. William Bolcom's sympathetic completion draws on original material both from this sonata and others to make a satisfying whole.

Except for the Sechzehn Deutsche Tänze, D783, none of the music recorded here was published during Schubert’s lifetime. Although he had begun to build a reputation as a composer of lieder, piano duets and dances after the publication of Erlkönig and the 36 Original Tänze in 1821, his dreams of recognition for his more ambitious works were to be continually frustrated by the indifference of publishers whose commercial interests were drawn to satisfying public demand for what he contemptuously dismissed as 'Miserable Mode-Waare' ('wretched fashionable stuff'). Given the poor prospects for his large-scale piano works, it is not surprising he left a number of incomplete movements and numerous standalone movements likely belonging to unfinished sonata projects. Of the 20 or so piano sonatas he began, only three appeared in print before his early death aged thirty-one in 1828.

Two years earlier Schubert’s imposing Sonata in A minor, D845, was his first to be published thanks to the Viennese firm of Anton Pennauer. Given this encouragement, and its positive notice by the Leipzig Allgemeine musikalische Zeitung, it is curious that he made no attempt to return to his Sonata in C major, D840 begun in April 1825 (only shortly before D845) and later abandoned after only completing its first two movements. In this form it was finally published in 1861 under the misleading title 'Reliquie' ('relic'). It is perhaps his largest unfinished piano sonata, yet its remarkable sense of space suggests it had the potential for being one of his most important four movement works.

The opening Moderato is built on two related themes; a 'plain-speaking' phrase in bare octaves with an answering chordal idea, is followed by one in the unrelated key of B minor that exploits the first theme’s initial interval of a sixth. This secondary theme also echoes the rhythm of the opening phrase and its syncopated accompaniment had initially appeared in an assertive restatement of the main theme. Continuity achieved thus far in the exposition is further underlined in the harmonically discursive development where earlier triplet figuration now contributes to its Beethovenian drama. This is eventually subdued by a subtly altered version of the main theme, its pianissimo 'false' reprise soon finding resolution in the right key (C major) before an extended coda and much renewed momentum brings a final quiet reminiscence of the chords heard near the outset.

For the ensuing rondo-form Andante, initially in C minor, Schubert alternates self-absorbed melancholy with peaceful acceptance in five extended paragraphs. Each finds room for brief moments of disturbance marked by falling sevenths (in the minor key sections) and rhythmic outbursts in the major key episodes. Both unsettling moments heighten the movement’s restless undercurrent which, despite a change to a bright C major with the return of the gentle flowing passage, closes with no small degree of resignation.

If 1825 had been a fruitful year for piano writing—it also included his Sonata in D major, D850 and the 8 Ecossaises, D977—1817 was Schubert’s other highly productive keyboard year; one that gave rise to repeated experiments with the piano sonata. Alongside six such works (commentators still argue how many sonatas were truly finished) the year yielded a set of Variations on a Theme by Anselm Hüttenbrenner, D576 and Two Scherzos, D593, believed to have been written in November when Schubert had temporally returned to live in his father’s schoolhouse.

The first is a convivial Allegretto in B-flat whose 'how do you do?' opening gesture and carefree manner has a certain Haydnesque humour where impish triplets make way for a song-like Trio in E flat major. Viennese gaiety is swept aside by the succeeding Scherzo, an extrovert Allegro moderato in D flat major launched with a series of rallying chords, which periodically return (twice in the distant key of E major) to provide structural pillars for busy passage work. The outwardly boisterous feel is set in relief by the quieter, yet still playful, central Trio.

The Ungarische Melodie, D817, belongs to the second of two visits Schubert made to Zelész in Hungary between late May and mid-October 1824. At a salary of 100 florins a month, his duties included teaching and supervising the musical activities of the two daughters of Count Johann Karl Esterházy of Galánta during their summer residence. Schubert still found time to compose and produced several works for piano duet including the C major Sonata ('Grand Duo'), D812, the Variations in A flat major, D813 and the Divertissement à la Hongroise, D818, works presumably envisioned for the girls. He would later dedicate his Fantasie in F minor, D940, to the younger sister Karoline. Contemporary reports indicate Schubert’s Melodie was inspired by a folk tune sung by a Hungarian maid working in the Esterházys’ kitchen. Dated 2nd September 1824, this short piece was to be the impetus behind the more expansive closing Rondo of his three-movement Divertissement à la Hongroise, which later went on to find a home within Franz Liszt’s two-handed transcription Mélodies hongroises d’après Schubert, S425.

Liszt was one of several composers who brought Schubert’s music to a wider public through editions of selected sonatas and dozens of transcriptions (mostly lieder) including the incorporation of nine waltzes into his Soirées de Vienne, S427. Dances occupied Schubert across his entire career and despite their neglect in concert performance his numerous collections contain a wealth of delightful music. According to Josef von Spaun, Schubert was in the habit of surprising his friends 'with the most beautiful German Dances and Ecossaises', while another member of the composer’s circle observed he would 'sit down at the piano where for hours he would improvise the loveliest waltzes; repeating those he remembered and then write them down'.

Of the 100 or so Deutsche Tänze (variously combining the character of the minuet, the ländler, and the waltz), these Sechzehn Deutsche Tänze, D783 were mainly composed in 1823 and 1824 and subsequently published in Vienna on 8 January 1825 under the title 'Deutsche Tänze und Ecossaises für das Pianoforte'. With two exceptions (Nos 1 and 10) they are laid out in the identical format of two eight-bar phrases, each repeated. The sturdy first gives way to tenderness in the second, while the winsome third yields to the whirling energy of the fourth. Flowing rhythms bring calm to the minor-key fifth and the sixth recalls the earthy manner of the first. A dream-like seventh is followed by the irregular accents of the eighth and stamping rhythms add a rustic flavour to its successor. Pre-echoes of Chopin might be detected in the gentle tenth, and to the eleventh Schubert generates sparkle. The next two (both in C major) are agreeably good-humoured, while two consecutive appearances of F minor introduce sobriety and the final dance (in F major) rounds off the set to match the mood of the opening. With perfectly judged contrasts of mood, texture and tonality, Schubert succeeds in creating a cohesive entity of otherwise disparate miniatures.

Schubert’s fondness for beginning movements with subdued unison statements finds expression again in his melancholy Allegretto in C minor, D915, unpublished until 1870 but penned on April 26th, 1827. It was conceived as a farewell gift for his friend Ferdinand Walcher—a fine amateur singer, lawyer and recently appointed member of the imperial civil service—who had entered Schubert’s circle the previous year and was soon to leave Vienna to take up a posting to Venice.

The work’s combination of 6/8 metre and flowing arpeggios seems to hint at gondoliers’ songs its dedicatee would soon encounter, and the alternating minor/major tonalities evoke the regret of departure and hope of return. Momentum in the outer panels is twice interrupted by the arrival of two disquieting chords, while sighing gestures bring untroubled warmth to the movement’s chordal centrepiece in a glowing A flat major.