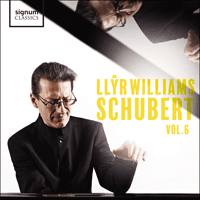 This album contains the earliest three of Schubert's piano sonatas Llŷr Williams included in his Cardiff series (there are eight earlier works in the genre—in varying states of completion). All three remained unpublished until after the composer's death, and together they mark Schubert's journey into composing maturity.

Piano Sonata in B major D575
1817, the year in which Franz Schubert (1797-1828) composed his Sonata in B major, was a year of significant musical activity in Europe. The Congress of Vienna two years before had stabilised European politics after the upheavals of the Napoleonic wars, and commissions for compositions once more began to flow. Rossini wrote four operas in that year, including La Cenerentola and The Thieving Magpie. Beethoven, much admired by Schubert, wrote his String Quintet, Op 104. Schubert himself composed his String Trio in B flat major. Although this sonata, catalogued as No 9, was composed in 1817, it was not published until after his death.

The sonata’s first movement, Allegro, ma non troppo, is heavily chromatic from the outset, with striding octaves stating the first subject. After the first fermata, there is a key change to G major, and the second subject, accompanied by triplets in the left hand, is introduced in octaves in the right hand.

This section explores further keys, moving through E major and F sharp major, and is then repeated. The recapitulation is unusual among Schubert’s sonatas in that it repeats the exposition section exactly, transposed down a fourth to the home key of B major.

The E major Andante has a song-like theme, simply harmonised, followed by a passage with bell-like spread chords over a lyrical melody in the bass. Later, a heroic bass melody in octave semiquavers is overtopped with dense chords, and then succeeded by the original theme, now played against a similar semiquaver figure. The bass semiquavers continue to rumble ominously as the movement comes to its otherwise tranquil end.

The G major Scherzo has a lively dance rhythm like a brisk Ländler or a rather bucolic minuet, contrasting with the lilting rhythm of the D major Trio, which has a running quaver figure throughout its length.

The Allegro giusto last movement returns to B major in a 3/8 dance-like theme, not so much lilting as limping bravely, to which a second subject of great lyricism is added, and then repeated in the minor. The movement explores the key of G major before returning to B major at its conclusion.

Piano Sonata in A major D664
'To hear and see his piano compositions played by himself was a real pleasure', recalled Schubert’s friend Albert Stadler many years after the composer’s death. After a performance of the slow movement from his expansive A minor Sonata D845 Schubert himself reported, 'Several people assured me that under my hands the keys became singing voices …' His cantabile playing style, suggested here, provides a clue to the essence of Schubert’s piano writing in which (with some obvious exceptions) a long-spun melody unfolds above a smooth rippling accompaniment. Despite his incomparable lyrical gifts and poetic sensitivity, Schubert’s sonatas have never achieved the same stature as Beethoven’s, yet for sheer accessibility there can be no better introduction to these works than this captivating Sonata in A major.

Composed when he was twenty-two, D664 marks the threshold of his final years and anticipates the transcendent works of his maturity. It was conceived amid the idyllic surroundings of the Alpine resort of Steyr in Upper Austria in July 1819 while the composer was on a walking tour with the baritone Michel Vogl. That the holiday had a reviving effect on Schubert is clear from the completion, the same summer, of his 'Trout' Quintet, one of his most overtly cheerful works. There’s little doubt of Schubert’s carefree vigour in this sonata’s blithe opening movement and its song-like main theme seems to breathe fresh mountain air, its serenity only briefly broken in the vigorous scales that animate the central development. A gentle melancholy unfolds in the harmonically ambiguous Andante (nominally in D major), notable for its persistent rhythmic scheme and a magical key change to G major. Wistfulness is swept aside in the trouble-free Allegro, bringing this finely crafted work to an emphatic close.

Piano Sonata in A minor D784
By the time Schubert wrote this Sonata in A minor in February 1823, the assurance and dynamism of 'The Wanderer' from four months earlier had all but vanished. With the collapse of his operatic ambitions and the knowledge of his irreversible syphilis (then endemic in Vienna), his sense of failure must have been complete. Little wonder that this second of three sonatas in A minor opens in such startlingly sombre tones. The bravura manner and heart-easing lyricism (shared with 'The Wanderer') assumes a tragic weariness here and anticipates the composer staring into the void in Winterreise and his final contributions to the sonata medium.

The first movement’s sullen mood seems to be a direct response to the news of his deteriorating health. It opens with an austere theme that soon expands into a forthright idea underpinned by ominous trills and tolling bells. Solace from bare octaves and determined scale figuration is eventually gained in a glowing passage in E major, remarkable for the sense of heartbreak within its bright tonality. Descending scales return with a vengeance in the central development, where fury is soon tamed by a now-transformed secondary theme. Fierce interruptions aside , the recapitulation unfolds with sombre reminiscences and the movement closes quietly. The introspection of the Andante offers a glimpse into a remote world, unsettled by mysterious rhythmic murmurings that regularly haunt its otherwise placid demeanour. By contrast, the helter-skelter finale seems bent on escape. Scurrying hands make way for a touching theme of wintry smiles, but it is the movement’s dramatic frenzy that colours a finale of Beethovenian defiance.