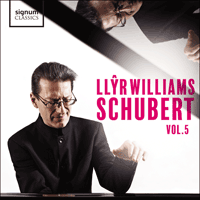 The great A minor of D845 was the first of his piano sonatas that Schubert made any effort to have published. Written in the spring of 1825, there is an air of defiance about the writing, perhaps the composer's response to his terminal diagnosis. D894 dates from some eighteen months later and—despite his ever-worsening health—is a rare beacon of tranquillity among the works of this period.

Piano Sonata in A minor D845
‘To hear and see his piano compositions played by himself was a real pleasure’, recalled Albert Stadler many years after the composer’s death. After a performance of the slow movement from his expansive A minor Sonata, D845 Schubert himself reported, ‘Several people assured me that under my hands the keys became singing voices …’ The implied cantabile playing style provides a clue to the essence of Schubert’s piano writing in which typically a long-spun melody unfolds above a smooth rippling accompaniment. Despite his incomparable lyrical gifts and poetic sensitivity his sonatas have never achieved the same stature as Beethoven’s, yet for sheer accessibility there can be few better introductions to Schubert’s twenty-one sonatas than the two captivating works presented here.

The first, D845, belongs to the early spring of 1825 following a miserable year which included a brief return to teaching at his father’s schoolhouse and confirmation of his syphilis. His music matured almost overnight: in works such as his Octet, the string quartet ‘Death and the Maiden’ and the ‘Grand Duo’ sonata a new depth of feeling emerged suggesting he was on the threshold of an extraordinarily productive final phase. This was to include a renewed interest in piano writing, notwithstanding earlier failures to secure critical attention or the rejection of his austere Sonata in A minor (D784). But Schubert would contribute three piano sonatas to the repertoire in 1825: those in C major (D840), D major (D850) and this characterful work in A minor.

Two contrasting themes shape the opening movement’s changeable mood: the first, heard at the outset in unison, is rather shy, and is soon followed by an assertive, defiant figure launched by descending octaves. The first theme, now in variant form, plays a significant role in the chromatically-rich development—its sense of foreboding gaining impetus until a surprise shift to A major temporarily dispels the unease. It is, however, the insistent secondary idea that eventually gains prominence and the movement ends on a note of tragic grandeur.

The slow movement comprises five variations on a simple melody carried initially by an inner voice. Following the first variation (with the melody now at the top), decoration and embellishment increasingly occupy the blithe second and third variations. Dramatic tensions disturb the minor key third, while the fourth (in A flat major) brings a certain élan and yields to a final variation, now in a serene C major. Persistent patterns in the A minor Scherzo are offset by flexible phrase lengths, varied voicing and a change to the tonic major, the whole relieved by a central Trio in a gently rocking F major. A busy Rondo Finale—marked by quavers with clear two-part textures—provides a brilliant close to this fascinating work.

Piano Sonata in G major D894
Schubert wrote this sonata in October 1826, the year in which he completed his Great C major Symphony and his dark and brooding G major string quartet. He was already ill, and much of his music from the last two years of his life is melancholy and full of thoughts of death. This sonata, however, is relatively tranquil in mood throughout, although with some darker passages. Schubert’s publisher Tobias Haslinger gave the first movement, which is in sonata form, the title ‘Fantasie’, and the nickname has stuck to the whole sonata. Haslinger seems to have wished to present the four movements as separate pieces (piano sonatas having gone temporarily out of fashion) but there is no doubt that Schubert intended them to form a unified sonata. Schubert dedicated the sonata to his friend Josef Ritter von Spaun, an Austrian nobleman who was Schubert’s generous patron and the host of several of the Schubertiade gatherings at which the composer played his music to friends and admirers.

The first movement, Molto moderato e cantabile, is in 12/8 time, the opening theme a dance-like, dotted rhythm, which leads into the second theme of the exposition, a leisurely waltz. The first theme returns in the exposition in a tempestuous form, but the movement ends in tranquillity again. The Andante second movement, still in G major, also begins in tranquillity but progresses to a stormier episode. When the opening melody returns, it is with ornamentation, rather like the ornamented repeat in a baroque da capo aria, with its ABA form. The menuetto and trio are in the relative key of B major, turning to B minor in the trio, and whereas there was a waltz in the first movement, the triple-time dance here is a Haydnesque Ländler, the rural precursor to the waltz, both in the minuet and the trio sections. The final movement, Allegretto, is a brisk and cheerful rondo including two contrasting episodes.