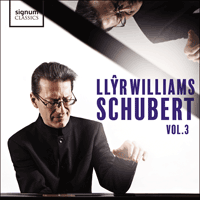 Two imposing piano sonatas—the upbeat D850 from 1825 and D958 composed in 1828 and very much a homage to Beethoven at whose funeral the previous year Schubert had been a pall-bearer—recorded during Llŷr Williams' Cardiff series in 2017/18.

Piano Sonata in C minor D958
Schubert’s last three piano sonatas, written between the spring and autumn of 1828, the last year of his life, are often considered as a group, sharing many elements of structure and form. He performed the three sonatas at a concert for his friends on 28 September 1828, and in October offered them to his publisher, Probst, who was not interested. Schubert’s health, already weak, rapidly deteriorated and he died on 19 November 1828, at the age of thirty-one.

The Sonata in C minor, like the others in the group of three, is strongly influenced by Beethoven, at whose funeral the previous year Schubert had been a pall-bearer. The opening of the Allegro first movement of this sonata is very close to the theme of Beethoven’s 32 Piano Variations on a theme (catalogue WoO80), which is also in C minor. There are also reminiscences of Beethoven’s 'Pathetique' sonata, No 8 Op 13, again in C minor. The second subject is a chorale-like tune in E flat major, the relative major to C minor.

After the repeat of the exposition section, the development continues chromatically, exploring distant keys. At the recapitulation there is a return to the tonic, and the coda dies away in reminiscences of the development section.

The second movement, Adagio, is in A flat major, and structured A-B-A-B-A. Its tranquil opening theme is developed in a way that gives it a darker quality, and in the B sections there is intense chromaticism and forceful, emotion-laden chords. The second appearance of the A and B sections is a semitone higher than before.

The third movement is a menuetto and trio, but far darker and more sombre in mood than the usual classical minuet. The menuetto is in C minor, in two parts, each repeated, the second part containing two bar-long rests that give a disquieting feeling that persists to the end of the movement. The trio is in A flat major, structured A-B-A, with the B section in E flat major.

The sonata-form final movement, Allegro, is again in C minor, and has a rapid, racing 6/8 rhythm reminiscent of a tarantella or a moto perpetuo. The first theme moves from C minor to C major, while the second moves towards C sharp minor. A new theme enters in the development section, progressing to a climax which introduces the recapitulation in which the first theme reappears in shortened form. The wild leaps and bounding arpeggios give the movement a liveliness that is offset by its predominantly minor key colouring, and leave something of the flavour of a dance of death.

Piano Sonata in D major D850
Franz Schubert wrote his Piano Sonata in D major, D850, while staying at the Austrian spa resort of Bad Gastein, due south of Salzburg, in August 1825. Bad Gastein was—and remains—a popular holiday spot, where the spa waters (later discovered by Marie Curie to contain radon) were thought to have therapeutic qualities. Schubert travelled there with his friend the baritone Michael Vogl, for whom he wrote many of his songs. Schubert wrote in a letter that he felt ‘imprisoned’ by ‘the incredibly high rocky walls … and the fearful depths below.’ Vogl had picked on Gastein as he was suffering from gout, and had decided that this spa town was the best place to take the cure. He also met his friend the poet Pyrker, two of whose poems Schubert set during his stay.

The sonata is in four movements, and has been noted for its Alpine qualities, both in melody and rhythm. The first, Allegro vivace, opens with a fanfare, immediately repeated in the minor, later developed in characteristic Schubertian manner in an exposition that wanders through many remote keys. The second subject has been compared to the sound of Austrian yodelling, and has some similarity with Schubert’s setting of Pyrker’s Das Heimweh. The second movement is in A major, and is in ABABA form, with a faster tempo than is usual in Schubert’s second movements of piano sonatas. The triplet figure that is so marked in the first movement reappears here. The second subject has some violent syncopation, which then merges with the more meditative opening subject as the movement comes to its conclusion. The third movement is a scherzo and trio in G major, with a lively, dotted quality to the scherzo and a steady lyricism to the trio. The last movement, again in D major, is a rondo in ABACA form, the main theme being a military march, repeated with variations and divisions, and interspersed with contrasting episodes, leading to a quiet coda.