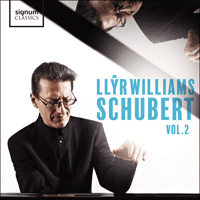 Schubert's final piano sonata—D960 in B flat major—and the seminal 'Wanderer' fantasy as captured live during Llŷr Williams' electrifying concert series at the Royal Welsh College of Music and Drama in 2018/9.

Piano Sonata in B flat major D960
As if facing down the irreversible truth of his illness, Schubert’s final year was, by any standards, extraordinarily fruitful. It saw the completion of his ninth symphony (March), the Fantasy in F minor (April), the Mass in E flat (begun in June), Schwanengesang (August), three epic piano sonatas, (September) and, finally, the glorious Quintet in C (October). Little-wonder that Benjamin Britten described Schubert’s last phase as the 'richest and most productive eighteen months in music history'.

Exhausted from feverish work by September 1828, and in ever-more deteriorating health, Schubert moved away from central Vienna to its leafy suburbs in a move designed to alleviate his condition. But dampness and poor sanitation at his brother’s house merely hindered any possibility of relief from his symptoms. It was within this unhealthy environment and background of acute headaches that his last three sonatas (including D960) were completed on 26 September.

The Sonata in B flat opens in a manner characteristic of many of Schubert’s songs and its gentle first theme, momentarily disturbed by an ominous bass trill (a chilling premonition if ever there was), glows with a prophetic luminosity. This theme gradually gathers intensity and, after a grand restatement, gives way to a new wandering melody. After the exploration of these ideas there appears a new theme in the bass (first heard from within staccato arpeggios) supported by an insistent rhythmic accompaniment. Appearing as if by stealth, the opening theme reappears now magically transformed, sublime and introspective. It is, however, more a sense of resignation than radiance that permeates the remainder of this expansive movement.

Only in the restrained tones of the Andante sostenuto, with its tolling-bell left hand, might one think Schubert was reconciled to his fate. Combining ethereal beauty and contemplation, the valedictory mood of this gentle dance is unmistakable. Its poetic stillness is abandoned in a delicately graceful Scherzo, its buoyant mood interrupted for a brief halting Trio. Just as silence interrupted the lyrical flow in the first movement (time stopping still), so too here in the fourth movement a recurring pause inhibits the flow of this exhilarating music. For all the underlying tensions that cloud this movement, its final pages conclude with a sense of determined affirmation.

Grosse Fantasie 'Wanderer' D760
The 'Wanderer' Fantasy was written in the autumn of 1822, soon after the composer ceased work on what was to become his 'Unfinished' Symphony and during a period when he was still confident of his operatic ventures. Perhaps no other piano work by Schubert better expresses his self-assurance, for the Fantasy is a work of considerable brilliance and its formidable demands would have seriously challenged its dedicatee—the wealthy businessman and amateur pianist Karl Emanuel von Liebenberg de Zsittin. Schubert himself was unable to play the work and supposedly exclaimed: 'The devil may play this, I can’t.'

Designed to be played without a break, its four movements are linked by a repeated-note rhythm, heard at the outset, derived from the song Der Wanderer about a lonely wayfarer whom fate has dealt unkindly. The work’s opening gambit generates two further ideas that are themselves subtle transformations of the initial statement. Assertiveness gives way to rumination in a slow section (with a rare upward shift of a semitone to C sharp minor) in which a fragment from the gentle 'Wanderer' melody provides both the work’s title and the basis for three variations. There follows a fiery scherzo which juxtaposes immense energy with a wonderful innocence in a theme of beguiling simplicity. The final section, beginning as a fugue, is no less apocalyptic, and its unrestrained bravura element concludes a work of extraordinary intensity.

Klavierstücke D946
Although a world away from the certainties of the 'Wanderer', there is no small degree of intensity in the first of Schubert’s Drei Klavierstücke, a set of three untitled piano pieces completed in May 1828. Had the composer not died six months later he might have added a fourth piece to conclude what could have been a third volume of Impromptus, a title still attributed on occasion to D946. Schubert’s decision to veer towards groups of single movement pieces such as Impromptus and Moments musicaux was no doubt prompted by publishers’ indifference to anything other than songs, piano duets and dances. Not one of the symphonies was published during Schubert’s lifetime, and it was Brahms who anonymously edited the Klavierstücke in 1868 and gave the works their collective title.

The first of the group was originally conceived as a five-part rondo with two contrasting episodes, and although the second was later withdrawn some pianists occasionally perform this extended edition. This shorter ABA version (heard here) is launched by an Allegro assai in the rarely used key of E flat minor. Its feverish momentum and repeated note figuration pauses just once for dramatic effect and is immediately followed by a restatement in the tonic major before yielding to a central Andante of rapt intimacy in the warm embrace of B major. Yet there’s little sense of serenity in its expansive lyricism, more a sense of quiet resignation, its unease created by dense left-hand chords, moments of technical virtuosity and restless tremolos.

Little wonder then that Robert Schumann, one of Schubert’s great admirers, wrote so highly of his music and declared: 'He has sounds to express the most delicate of feelings, of thoughts, indeed even for the events and conditions of human life.'