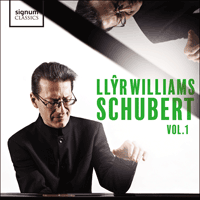 Recorded live in Cardiff, this first instalment in Llŷr Williams' eight-album Schubert series includes two of the composer's most perennially popular works in the genre: the late A major sonata and the six Moments musicaux.

Piano Sonata in A major D959
The Sonata No 20 in A major was written in 1828 and is Schubert’s penultimate sonata, completed only a few months before his death. He wrote his last three piano sonatas between the spring and autumn of 1828, and seems to have intended them as a set, as there are thematic resemblances both within the individual sonata movements and between the three sonatas themselves. These sonatas were not published until ten years after Schubert’s death, and took a long time to be accepted as the late masterpieces they are, alongside the Quintet in C major and the songs later collected as Schwanengesang.

The first movement is in A major, marked Allegro, and opens with declamatory chords over an A pedal, followed by downward-tumbling arpeggios. The second subject is song-like, harmonised in four parts. As is usual in classical sonata form, the second subject exposition is in the dominant, E major. The development section moves between C major and B major, and is based on a version of the second subject. The recapitulation returns to the tonic, and visits the tonic minor, before the coda builds on the opening theme, played more quietly, and the movement ends with delicate, pianissimo arpeggios ascending and descending the length of the keyboard.

The second movement, Andantino, is in F sharp minor (sharing a key signature of three sharps with A major) and opens with a plaintive, melancholy theme, where the descending seconds sound like a sigh. The movement is in ABA form, and the middle section is a turbulent fantasia, wandering through distant keys and punctuated by crashing chords concluding in C sharp minor. A recitative-like, declamatory passage broken by dramatic pauses leads back to the A section, now modified by ornamentation in its accompaniment.

The Scherzo is back in A major, and opens with brisk, broken chords that are a continuation of those that ended the previous movement, thus linking the two together. There is something barcarolle-like in the lively sextuplets of the Scherzo’s B section, which ends with a falling C sharp major scale for which Schubert gives no harmonic preparation. The D major trio is also in ABA (ternary) form, and uses hand-crossing to set up its own contrasting texture before the movement concludes with a reprise of the Scherzo.

The final movement is a lyrical Rondo, and its melody has been described as an answer to the question posed by the sonata’s opening theme. It takes the form ABA – development – ABA – coda, and is therefore in rondo-sonata form. During the development, Schubert returns to C sharp minor which has already made several appearances in the sonata, another element that links the movements together. The coda brings back a broken version of the first subject, again broken up by dramatic full-bar pauses, followed by a presto section. The sonata ends in a reverse of its opening, with an ascending arpeggio followed by the declamatory chords played in reverse.

Moments musicaux D780
Schubert’s Moments musicaux were published by Leidesdorf in Vienna in 1828, the year of Schubert’s death, and are among his most popular pieces of solo piano music. The first moment begins with a unison statement, and goes on to develop this in triplets, in an ABA form. The second, Andantino, has the mood of a lullaby, in 9/8 time. The third, Allegro moderato, begins in F minor and ends in F major, with a brass-band-like bass line heralding the dance theme.

The fourth movement, in C sharp minor, has a running, accompaniment in semiquavers in the A sections, while the central B section releases the tension. Like the third movement, the Allegro vivace begins in F minor and ends in F major, with passionate chords and a rapid movement. The final movement, in A flat major, has a superficial simplicity that reveals greater depths of emotion and meaning.

Klavierstücke D946
Two months before the publication of Moments musicaux in July 1828, Schubert completed the first two of what were to become his Drei Klavierstücke. The third is thought to have been written the previous year, although it is not known if the three pieces were intended to form a distinct group. These works, like his two volumes of Impromptus (D899 and D935) dating from 1827 and Moments musicaux (D780), written periodically between 1823 and 1828, all belong to a group of character pieces which in varying degrees approach the status of full-scale sonata movements.

Just as all but three of his piano sonatas were published posthumously, so too these Klavierstücke had to wait until Brahms issued them for the first time in 1868, forty years after Schubert’s death. Perhaps the neutral title of Klavierstücke ('piano pieces') has prevented their better acquaintance, yet while these works are less celebrated than his other character pieces they are as substantial and searching as any of his late sonatas and are among the composer’s most forward-looking creations.

No 3 is in a bright C major and is the shortest and yet most virtuosic of the group, sharing its ABA structure with No 1, otherwise inhabiting a markedly different character. To the third’s ebullient outer sections, with its five bar phrase patterns, offbeat accents and forte outbursts, Schubert adds a jubilant coda which hurtles along to a bracing close. But a central panel in D flat major (a semi-tone key shift previously applied for the slow section of the 'Wanderer') provides an emotionally remote hymn-like foil, its insistent pulse and repeated rhythmic shapes bordering on the hypnotic.