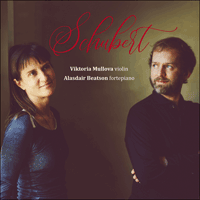 Three sublime masterworks from the final decade of Schubert's all-too-short life, in performances every bit as ground-breaking as the composer must have intended them to be.

Is there a more uplifting and nourishing musical soul than Schubert? For much of the last year, Viktoria and I have shared intensive and companionable time with the composer, renewing our connection with this humble, generous, sympathetic and precious spirit. Much of Schubert’s music speaks simply: tuneful melodies one can whistle; infectious dance rhythms; an organically flowing structure as though composed in real-time (it almost was!). There seems an effortless craft to his writing—perfect as if by coincidence.

And yet this music is also utterly radical. It encompasses the widest of emotional spectrums, often soaring between euphoric highs and desolate lows within just a few bars. There is a harmonic sleight of hand that astonishes and moves us with a magic impermeable to academic scrutiny. Especially in his later works—those which transport us the furthest—Schubert forges new and novel structures to contain their vast scope, and demands ever more instrumental intricacies to paint his music in the most vivid of colours. All this musical expansion, of course, took place hand in hand with the rapidly developing mechanics and sound-world of the fortepiano, and the increasing virtuosity of the musicians around him.

While today it is still uncommon to hear these works on historical instruments, there are myriad rewards for those who so adventure. But it does take a leap of courage, and I have bottomless respect and awe for Viktoria as she dispatches the fearsome virtuosics of the notorious Fantasie—even more perilous on gut strings and classical bow—with consistent finesse and artistry. I play a modern copy of an 1819 Graf made by Paul McNulty, an exquisite instrument which inspires and informs in equal measure. It has fabulous balance, colour, clarity and transparency across its range, and matches Viktoria’s Guadagnini violin in articulations and timbres. Its una corda, moderator and double moderator pedals offer additional subtleties of soft sounds—so crucially important to capture the tenderness and occasional fragility of Schubert’s pianissimi.

The works presented on this recording span the final decade of Schubert’s life. We begin with the Sonata in A of 1817, its lyrical, wistful opening giving way to a Viennese joy and exuberance. We close with the Rondo in B minor of 1826, thrilling in its heroic journey through an abundance of themes, with twists and turns almost competitively athletic between the two instruments. And at the heart of the recording, the Fantasie in C of 1827—a music unutterably inspired, ravishingly beautiful, a tour de force of colour and texture, an unpredictable and unparalleled dreamlike vision of another world.