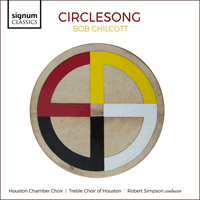 A work filled with ambition, Bob Chilcott's Circlesong is a musical portrayal of the human life-cycle as captured in the indigenous poetry of North America. It is here performed by the multiple-award-winning Houston Chamber Choir.

In a world which can seem so confusing and chaotic, we are uplifted through these voices singing indigenous poetry and songs. The wisdom of the ages continues to build bridges of understanding through music and voice, touching our hearts and minds, bringing us to a place of mutual appreciation and shared humanity.

Circlesong reminds me of where my people have come from, and of where we are going, as we endeavour to make decisions for the seven generations yet to come. We must remain mindful of our responsibility to everything in the web of life, not just of ourselves. I’m reminded of the resilience and strength of our ancestors through their timeless words as shared by them, historically, and through Circlesong. We are still here.
(© Renée Roman Nose, MAIS—enrolled member of the Cheyenne and Arapaho Tribes of Oklahoma, activist, artist, actor, poet, painter, photographer, and cultural anthropologist)

In the late 1990s, when I started writing a good deal of music for young voices, I spent time searching for texts to inspire singers through narratives and messages that might make us all reflect in a positive way on how we relate to ourselves and to others. I discovered many such texts and prayers from various sources and after setting several for upper voice choir, including Like a rainbow, Circles of motion, and All things pass, as recorded here, I was inspired to write a larger work, a life-cycle piece, based on First Nations poetry from North America.

The texts for Circlesong come from a number of publications, including American Poetry, Volume 2, published by The Library of America, and Native American Songs and Poems, edited by Brian Swann. There are translations by Charles Fenno Hoffman from 1839, by Franz Boas from 1887, 1888, and 1896, and by Washington Matthews from 1902.

A recurring image in the poetry was that of a circle and I became fascinated by this. On a musical level the circle is the shape of the musical notehead, a written symbol that comes to life in sound. The circle is the shape of our world, of the sun and of the moon. The circle symbolizes the day and the night, the pattern of the seasons, and the cyclical round of our natural world. The circle also symbolizes our interdependence and, most importantly, our unity. I found a beautiful poem, 'Song for bringing a child into the world', written on the page in the shape of a circle, and this set me on my way. I decided to cast this piece within a concept loosely modelled on the seven ages of man—Birth, Childhood, Lover, Adulthood, Middle Age, Old Age, Death—using these beautiful poems ultimately to articulate the importance of living life with care and respect, not only for our world, but also for ourselves and each other, with all that that entails.

Translations of any writings from their original language, be they the Bible, poems by Basho, ancient Chinese writings, indigenous poems, poems by Rilke, or indeed a contemporary Swedish crime novel, are by their very nature subjective. But the act of translating a text shows the desire to enable wider access to what that text has to say and to give. It is perhaps one way of sharing our different voices, surroundings, upbringings, and the circumstances that help us to identify the ideas, thoughts, and feelings that we do in fact share.

As a composer I am aware that in choosing texts to set I am in essence an interpreter of these texts, and in my efforts to do so I am also, like the translator, presenting a subjective view. This may involve a degree of manipulation of the text, as nowadays many singers feel uncomfortable defining certain terminology, particularly in sacred texts, which may divide us. There are many other composers who set sacred and secular texts from all sources, and we do our utmost to honour traditions and identify, based on our own experience, what it is in any text that expresses our integrity as people, and our communality.

The importance of this to the choir singer is paramount. Choral singing is, by its very nature, a great leveller. People come together, regardless of background, race, perceived social standing, belief, and sexual preference to form an expression of unity through music. The singers may not all share the ideas of the sentiments they sing, but one of music’s powers is the ability to give dimension to words that can help us understand concepts, thoughts, and each other in a better and more positive way.

As a composer, I feel it is my responsibility to find texts that open worlds for myself and for people through singing them together, whether they be texts of indigenous peoples, biblical texts, Renaissance poetry, or ancient Chinese wisdom. If the same poem was set by an American composer, or an African, a Latvian, or Japanese one, or by me, we would all do it in a completely different way based on our own life experiences, and each one would be valid in its own way. That is what unites us.

Circlesong was originally written in 2003 for the Birmingham Festival Chorus and City of Birmingham Young Voices and premiered in Birmingham, England in 2004. The work was revised in 2019 for Robert Simpson and the Houston Chamber Choir and first performed in Houston in February 2020. It is scored for upper voice choir, mixed choir, two pianos, and four percussion players.

I wish to express my thanks to Robert Simpson and all those associated with the Houston Chamber Choir, Marianna Parnas-Simpson and the Treble Choir of Houston, Val Withams of Choral Connections, Amy Chang from Oxford University Press, audio engineer Ryan Edwards, and to Mike Hatch from Signum Records for the warmth, dedication, and commitment they have shown to help bring this project to life.