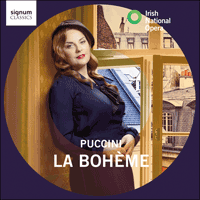 Act 1
We find ourselves in a garret where the artist Marcello is painting a picture while Rodolfo, a poet, is busy on the last act of his new drama. It is very cold and as they have no fire they use the manuscript of Rodolfo’s play for fuel. The unexpected happens. After Colline, a philosopher, arrives with books he hasn’t been able to sell, he is followed by the musician Schaunard, who brings home food and wine and relates the story of his good fortune. The others are too hungry to listen, but just go on eating and drinking. They are interrupted by a knock at the door. It is the landlord Benoît, who is calling to collect the rent. The bohemians sit him down and ply him with enough drink to get him drunk. He tells them about some of his amorous episodes, and when he incidentally remarks that he is a married man, they fake indignation and throw him out. The quartet decide to spend the rent money on dinner at the neighbourhood’s Café Momus. Three of them head off while Rodolfo remains to put the finishing touches to his drama. He makes little progress, and indeed is rather glad to find his work interrupted by the entrance of the seamstress Mimì, a neighbour, whose candle blew out as she was going upstairs. Rodolfo lights it and she goes off, only to return again, saying she has forgotten her key. Then both candles go out, and the pair stumble against one another in their search for it. Rodolfo finds the key and conceals it in his pocket so they can spend more time together. They start sharing parts of their life-stories. From outside they hear the voices of Rodolfo’s friends calling. The two, who have fallen for each other, decide to go together to the café. They leave, declaring their everlasting love.

Act 2
We are brought to the Café Momus, which is situated in a busy street. There is a great crowd of people, buying and selling. The bohemians are enjoying the good things provided by the café. Musetta, an old flame of Marcello’s, arrives with her latest conquest, Alcindoro, a rich, elderly sugar-daddy. After several vain attempts to attract Marcello’s attention, she pretends to suffer from the effects of a tight shoe, and while her new admirer is away at the shoe-makers to have the shoe stretched, Musetta and Marcello become reconciled. When the time comes to pay the bill they realise that Schaunard’s money is all gone. Musetta solves the problem by leaving her rich admirer to settle it. They all traipse off following a band which is passing down the street. After they’re gone, the old man arrives back with Musetta’s shoe. The waiter hands him the bill. Alcindoro is staggered by the amount.

Act 3
We are at a toll gate on the Orléans road into Paris. It is early morning and the pedlars are arriving, each declaring to the guards the contents of their baskets. The snow is falling, covering the steps of the little tavern where Marcello has been hired to paint signs for the innkeeper. Rodolfo is staying at the inn, but the course of his love for Mimì has not run smoothly, and they broke up the previous night. Mimì comes to see him, and, encountering Marcello, tells him of her troubles. As they talk Rodolfo is heard approaching from the inn. Mimì conceals herself behind a tree. Rodolfo tells Marcello he wants a separation from Mimì. But he gets no sympathy from his friend, who instead upbraids him for stubbornness and bad temper. Rodolfo then seeks to explain his conduct by revealing the fact that Mimì is too delicate, and, in fact, is dying from consumption. The unfortunate Mimì overhears all this and her coughing betrays her presence. Rodolfo is stricken with remorse and pity, and although the lovers patch things up, they agree they will part in the spring. Musetta, in the meantime, has another violent quarrel with Marcello and leaves him in anger.

Act 4
We are back in the garret in the Latin quarter. Again we see Marcello seeming to paint and Rodolfo seeming to write poetry. They are both out of sorts, so when Schaunard and Colline arrive with the dinner, they are glad of an excuse to abandon all pretence of work. The four engage in a burlesque of a great banquet, and when their fun is at its climax, Musetta and Mimì appear in the doorway. Mimi, who had taken a new lover, some well-to-do individual, has left him to return to spend her last moments with Rodolfo. Her disease has left her with scarcely strength enough to climb the stairs. They assist her to bed, and when Rodolfo and Mimì are left alone they recall their past happiness. Gradually Mimì sinks and dies in the arms of her lover.
(adapted from Irish composer Harold R White’s 'Stories of the Operas', printed for the Carl Rosa Opera Company, the company which gave the Irish premiere of La bohème in 1897)